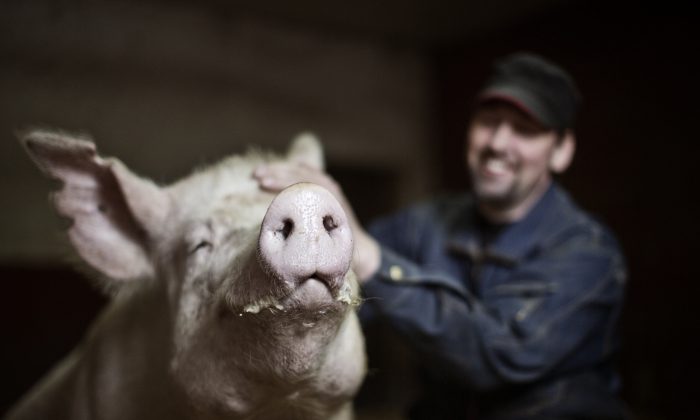 Pigs are easy-going animals and nice to work with, says pig farmer Per Jonsson, who does online farming in Sweden. Jamtland, May 2013. (Tina Stafrén)
Europe

Large-scale food production is often anonymous, and some small-scale farmers have been trying to set themselves apart with food packaging telling their stories. Information about the farm and the methods of production are meant to make the customer feel closer to the product.

Now this is possible through the online platform, Min Farm.

Personal contact between customer and farmer is at the heart of the project. The customer knows who is handling the animals, and what the animals are fed. Internet shopping is not typically viewed as a social activity, but Min Farm also allows farmers and customers to meet face-to-face. Customers are encouraged to visit the farms if they wish.

Swedes using Min Farm now know the people growing their food—like in the old days, but through modern means.

“You can see how the social aspect is important for both groups,” said Petter Hanberger, one of the project founders. “The feeling of fellowship and being together is important. It’s easy to underrate it.”

Last weekend, the first customers visited the first farm in person through the project. “There have been so many preparations,” Hanberger said, “so it’s fascinating to finally get started for real.”

It was an Irishman, Stephen Lynam, who came up with the idea a little over a year ago. He lives in a small cottage outside of Umea in northern Sweden, growing his own food and living a self-sustaining lifestyle as much as possible.

He wanted to lease a lamb or some chickens from a local farmer for his cottage. As he spoke to farmers in his community, he learned many were interested in getting closer to their customers.

Lynam’s background in IT made him consider an online platform.

Hanberger, who works in advertising and design, got on board, and they got to work. It is still a small-scale operation with 10 customers and eight farmers, but there are already plans to develop the project further in other parts of the country.

The customers are mixed, but many families have contacted the project, as well as older people.

“For someone in their seventies, it’s fascinating to see how it looks the way it did when they were young,” Hanberger said. “This project brings that aspect back, and many of the older people participating can see this.”

One of the project’s customers, Eva Alfredsson, wanted her food producers to be less anonymous, and she thinks others will follow what she sees as a growing trend to reconnect with the source.

“I was surprised by my own enthusiasm,” said Alfredsson, a Ministry of Enterprise, Energy, and Communications worker. “At heart, I think it’s about being part of a context, [about] knowing where the food comes from.”

She said it is about “having a relationship with those who produce it, a mutual dependence.”

Alfredsson estimates she is able to get 10 percent of her household’s food through Min Farm. Currently, it is possible to order beef, pork, lamb, eggs, timber, honey, potatoes, flour, and grains through the network.

Alfredsson thinks it’s a good start on the path to sustainability.

“We are failing to turn society in a truly sustainable direction on a political level, both nationally and internationally,” she said. “We can’t seem to make the decisions needed. That means that lots of grassroots solutions appear. They may not be optimal, but people are taking development into their own hands.”

The animal ethics perspective is what Alfredsson finds most positive about the project, but she also sees it as a way to support local farmers who want to uphold good quality and care for their animals, but who find it hard to compete against companies focusing on low prices.

Pig farmer Per Jonsson participates in the project. In 2008, he and his brother took over the farm that has been passed down in his family since 1849. The brothers also run a carpentry business to make ends meet, but their dream is to live completely on profits from their pig farm.

In the future, they hope to have a butcher shop next to the farm. They also plan to let their customers come to the farm and make their own sausage.

“We had a similar idea [as the Min Farm project] before, but the guy who started it is much better with computers,” Jonsson said. “You should stick to what you’re good at. We raise animals, and we’re better at that.”

The program, still in its infancy, has not made a large impact on Jonsson’s business yet, but getting help with marketing has freed up some of his time for other pursuits.

Cutting out the middleman, farmers earn more for their goods. At the same time, people become more aware of what they eat. Jonsson thinks this is a major advantage, and he thinks a market exists for this kind of initiative.

“Small business people like us need to find different ways to survive,” he said. “We can’t make bulk products, sell enormous quantities at a low price and compete with foreign actors.”