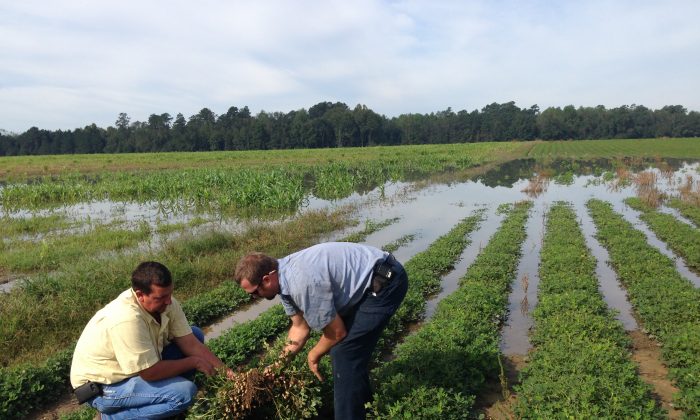 Thad Wimberly, left, and Jonathan Berry inspect the damage to a field of peanuts following record rainfall and flooding in Branchville, SC. on Friday, Oct. 9, 2015. (AP Photo/Adam Beam)
US

BRANCHVILLE, S.C.— Thad Wimberly tugs on a clump of peanuts, shaking off the mud as he cracks the soggy shells to inspect his crop. But all he can do is sigh as his livelihood disintegrates between his fingers.

Just a week ago, the 2,500 acres Wimberly farms with his partner, Jonathan Berry, baked in a drought that wiped out his corn crop. Now, his fields 60 miles south of Columbia in Branchville are filled with water. Moisture is trapped in his peanuts, creating mold and other toxins that make them unfit for humans and animals to eat.

He expects to lose as much as $1 million this year, as crop insurance only covers a portion of market prices. It paid out only about $120 an acre for his corn, which he estimated he could have sold for $300 to $400 per acre.

“That’s the life of a farmer. You put your heart and soul into the ground, then something devastating happens like this and you are done,” Wimberly said. “Farming is gambling.”

Across South Carolina, the misery continues: Preliminary estimates show crop losses could total more than $300 million in the state’s $3 billion-a-year agriculture industry. Interstate 95, vital to the East Coast economy for trucking, remains closed over a stretch of 13 miles, forcing travelers to take a massive detour. The capital city is fighting to keep its water system running while people have to boil tap water before drinking it.

And even more rain could be on the way. A storm system will stall near the coast this weekend, bringing as much as an additional inch of rain to some areas, according to the National Weather Service. The heaviest rain is expected Saturday, although forecasters said it shouldn’t be enough to flood any additional areas.

Flood waters continue to move toward the sea, although authorities don’t expect the devastating damage that happened in Columbia when up to 20 inches of rain fell over two days last weekend.

Haley continued to urge people in Georgetown County and other coastal areas to be vigilant as flood waters rise. No one has had to be evacuated yet, but the water was isolating some homes, and the governor warned emergency officials could start knocking on doors any time.

It just isn’t residents who are inconvenienced. The foundations under some of the 18 small bridges that crisscross two rivers and swamps on a 13-mile closed stretch of Interstate 95 have been washed away and must be repaired before the highway can be re-opened, South Carolina Department of Transportation Secretary Christy Hall said Friday.

A contractor will begin working on the bridges 24 hours a day starting Saturday, said Hall, who had no estimate when the road which carries 30,000 vehicles a day could reopen. In the meantime, travelers who would normally drive 74 miles between Interstate 26 to Interstate 20 must take a 168-mile detour through Columbia.

For farmers, the worst of the flood damage was in low lying fields that spent days in standing water, hitting peanuts, cotton and soybeans especially hard, Agriculture Commissioner Hugh Weathers said. However, those crops account for a small percentage of what’s grown across the U.S. And the state’s top agriculture products — timber and poultry — took less of a hit, so national supplies shouldn’t be too severely affected.

Back in Branchville, Wimberly and Berry have lost up to 75 percent of their peanuts, cotton and soybeans. The tractors and combines and Wimco farms sit idle, unable to get out into the swampy fields. The only thing in abundance is anxiety, the hope that some assistance will ease the sting.

“We might not have a foot of water standing out here, but this is worse,” he said. “It’s not only the farm, or the money part of it, it takes a toll on your life. The stress. You’re worrying about trying to make your bills, you worry about making sure your family is taken care of.”