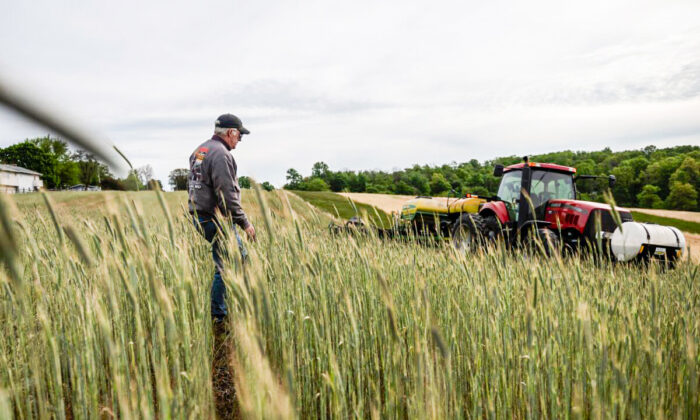 A farmer walks back to his tractor as he plants corn in the Marvin Chapel field in Mount Airy, Md., on May 19, 2020. (Andrew Caballero-Reynolds/AFP via Getty Images)
Economy

Goods and services around the country are becoming increasingly more expensive, but farmers may be among the hardest hit as inflation, supply chain issues, and Russia’s invasion of Ukraine are expected to send food prices soaring even higher.

That impact is being felt by farmers around the country.

“The cost of fertilizer is up as much as 500 percent in some areas,” said Indiana Farm Bureau President Randy Kron. “It would be unbelievable if I hadn’t seen it for myself as I priced fertilizer for our farm in southern Indiana. Fertilizer is a global commodity and can be influenced by multiple market factors, including the situation in Ukraine, and all of these are helping to drive up costs.”

Ukraine is a significant supplier of both crops and fertilizer materials, adding to the concern that the invasion will likely lead to shortages and price increases.

Fertilizer prices for nitrogen, phosphorous and potassium, called NPK, have exploded since December 2020.

“Because of the seasonal aspects of … this agriculture industry, it takes about six to nine months for the impacts felt in the impact market to really work its way through the supply chain and reach the consumer,” said Nathon Carson, head of supply chain operations for Chemical Dynamics, a multi-million dollar fertilizer supplier based in Florida servicing 12 states. “The crazy thing is, fertilizer prices for NPK, especially nitrogen, the most important nutrient, went up by about … doubled essentially in Q4 of 2021, which means we are not really going to see those impacts until this coming summer.”

That fertilizer price increase is one of several factors expected to push food prices up even higher this year.

“Food prices are going to continue to go up dramatically,” Carson said. “I was expecting food prices to go up about 10 percent in the U.S. before midterms, so around August, another 5 or so percent to follow by the end of the year … You could see 20 percent food price inflation by the end of the year in the U.S. That is a possibility. You won’t see famine in the U.S. Our food system is very, very resilient, but you will see shortages. You won’t have the same product selection that you’re used to.”

These food price issues have only been egged on by runaway federal spending, which has helped send inflation soaring in the past year.

The Bureau of Labor Statistics reported last week that the Consumer Price index, a leading marker of inflation, rose 7.9 percent in the past 12 months. BLS said that the food price index rose 8.6 percent over the last 12 months, the largest 12-month spike since April 1981.

“Inflation has hit agricultural inputs such as fertilizer and equipment, which will contribute to the increasing cost of food,” said Chris Hagenow, vice president of Iowans for Tax Relief. “Inflation is dangerous because it is a hidden tax and it destroys the income earned by both farmers and workers. This inflation is a direct consequence of the out-of-control spending that is plaguing the federal government. Our national debt has hit $30 trillion and President [Joe] Biden and the Democrats believe that spending and printing money has no economic consequences. Farmers and consumers will continue to see higher prices and it will damage the economy.”

BLS found that in February, those price increases hit all kinds of foods on grocery store shelves.

“The index for meats, poultry, fish, and eggs increased 1.2 percent in February as all of its major component indexes increased,” BLS added.

“The problem has been developing for several years, so unfortunately, the solution will take time, too,” he said. “Farm Bureau is urging the Biden administration to look for ways to bring fertilizer prices down, including resolving supply chain issues and removing import duties. These rising input costs will have a major impact on all of us this spring as we prepare to put crops in the ground and they will eat away much of the profit we might have expected to make from higher commodity prices.”