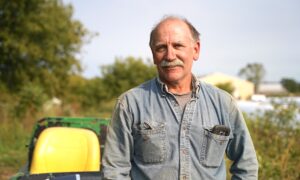 NEOSHO, Wis.—Farmer Tony Peirick of Dodge County, Wisconsin, said he used to see as adversaries those trying to impose environmental regulations on farmers. “We were like water and oil. We never got along,” he told The Epoch Times.

For him, it was about butting heads with a local lake association that wanted to regulate practices on surrounding farms. In rural America at large, tension has often abounded over the apparent conflict between environmental regulations and farming practices that make economic sense.

But Peirick and a farmers’ conservation group he formed have found success in teaming up with their former adversaries. They protect the environment and run their businesses well at the same time. And more than 30 other such groups throughout the state have done the same.

President Joe Biden and his new agriculture secretary, Tom Vilsack, have emphasized environmental policies as a priority, creating some nervousness among farmers about what kind of regulations might come down and impact their work.

Many Wisconsin farmers told The Epoch Times that the best way to protect the environment is voluntary, incentive-based and market-based measures, rather than top-down regulations.

“Invest into groups like ours,” Peirick said. “We are the boots on the ground.”

It started several years ago when the lake association in Dodge County was pushing for mandatory buffer zones around bodies of water. Water runoff from farms containing phosphorus and nitrogen can harm the health of these lakes and streams.

“Farmers can fix the problem a lot easier than the lake associations telling the farmers what to do,” Peirick said. “Farmers want to take care of their land. … The land is the only thing they’ve got, and they want to be good stewards and take care of it. A lot of times they were just not taught how to.”

For years, Peirick—a dairy, corn, and soybean farmer—had used conservation practices to improve soil health and reduce runoff on his own farm. He decided to help other farmers do the same.

This year, Peirick got over 20 farmers to adopt these conservation practices for the first time, adding to the 22 continuing from previous years he has worked with them.

Peirick described how his view of the lake association has changed as he worked with them on this conservation project: “Now I give a lot of credit to them: they were willing to sit and listen, and they put their money where their mouth is.”

He is grateful for the financial and technical help they, and the state government, have provided to his group.

There are about 33 farmer-led watershed groups like Peirick’s throughout Wisconsin, and each is working to conserve its watershed in a way that makes economic sense for farmers in the long run.

Between 2018 and 2019, they reduced nearly 100,000 lbs of potential phosphorus runoff into Wisconsin’s water bodies with the help of grants from the Wisconsin Department of Agriculture, Trade, and Consumer Protection. This year, Governor Tony Evers increased the farmer-led watershed protection grants.

A Farmer’s Journey of Conserving Soil

Peirick, 64, grew up farming with his father in the ‘70s in Watertown, Wisconsin, and he was always taught to till the land to make it “nice and black” after harvest.

“You weren’t supposed to have any residues on the surface of your soil,” Peirick said. “My dad said if a farmer had all these residues, he wasn’t a good farmer.”

In 1994, after Peirick and his brother took over the farm from his father, an independent crop consultant advised Peirick to try a different farming method called no-till—to not disturb the soil and to conserve the living organisms in it after harvest. Peirick took heed, and it was the start of a two-decade-long journey of conservation farming.

In the early years, his corn struggled, and the yield suffered. But as he kept on, in about three to five years, everything started turning.

He had less soil runoff, with more nutrients instead staying in the soil. He was able to reduce the use of synthetic fertilizer. He also had fewer weeds, which meant less money spent on herbicide. He was able to retire machinery for tillage farming, thus saving maintenance and fuel costs. He began to see the financial benefits of no-till farming.

In 2005, he adopted another conservation practice, the use of cover crops—plants that are grown not for harvest but solely for conserving the soil and enhancing its health.

He planted cereal rye, one of the most common cover crops. Again, the corn suffered at first, but Peirick saw it through.

Now, his soil’s health has improved to the point where he can get away from seed treatment (applying chemicals to seeds to prevent pests, diseases, and nutrient deficiencies)—another financial benefit.

As his farming practices changed, so did his view of mother nature.

For example, he used to see weeds as his enemy and fight them hard with commercial herbicides. Now, he sees himself as the one who created the problems that caused weeds to grow; by tilling, he destroyed the living organisms in the soil, and weeds were the result.

“Weeds are always the first line of defense for mother nature to come in and start getting your soil biology back on track,” Peirick said. “There are more living organisms in a teaspoon of soil than there are people on earth. It’s like building a house, why would you tear it down every year?”

“Mother nature can take care of itself. All we got to do is to help mother nature out there and she will put our soils where they are supposed to be.”

He and a few other like-minded farmers now host tours on their farms to showcase their conservation practices. They invite farmers who have had success with these practices to speak at their group’s meetings. Last year, over 400 farmers in Dodge County attended their education sessions.

“It’s farmer-to-farmer contact that makes this happen. A lot of farmers want to see what’s happening next door,” Peirick said.

“I get so many calls from farmers: They’re afraid to do something different, and they always need that assurance from a fellow farmer.”

He is honest with them about the frustrations in the early years of implementing conservation practices. “It’s going to be a slow process. You can’t do it overnight,” Peirick said. “Just like an addiction, it’s going to take rehab.”

Chris Conley, a dairy farmer from Neosho Wisconsin, is a member of Peirick’s group. He began no-till and using cover crops about three years ago. He just sold his old John Deere planter because he no longer needed it.

These conservation practices improved his soil to the point where he didn’t see any soil washed off on his hilly farmland after heavy rainfall last year.

“I think it would help tremendously if the government looks at conservation practices—not necessarily forcing people to do them, but to take their time to work with farmers slowly but surely and ease their way into it,” Conley told The Epoch Times.

Don Niles, the president of Peninsula Pride Farms, another farmer-led watershed group in northern Wisconsin, agrees that education is the best way to get farmers to adopt conservation practices. His group has about 57 members.

“Farmers are pretty independent people. When you give somebody a regulation, they push against that as much as they can because they feel something has been imposed on them. We, on the other hand, are trying to make for an internal motivation.”

By the end of 2019, the groups’ members had planted cover crops on a combined total of 10,000 acres in Door and Kewaunee Counties in northern Wisconsin. The farms saw a reduction of soil runoff between about 300 and 960 tons each, and a reduction of phosphorus loss between about 400 and 1,350 pounds each.

Niles thinks this education approach would work well at the federal level too.

“For the Department of Agriculture for the last several administrations, the more they’ve taken the approach of teaching and motivating versus rulemaking, I think they’ve seen better results,” Niles said.

“We look forward to any new programs under the new administration, but we also treasure our independence and the ability to try things on our own and see for ourselves how they work in our fields.”

Joe Bragger, a member of the Buffalo Trempealeau Farmer Network, a farmer-led watershed group in western Wisconsin, hopes that Agriculture Secretary Vilsack will take time to learn about the conservation practices the farmers have already implemented across the country and put resources into groups like theirs to further the movement.

“If we build those relationships and get people to be willing to participate, we may not have to write a lot more rules,” Bragger said.

These farmer-led watershed groups in Wisconsin work together with the environmental groups and governmental agencies in their regions, which provide much-needed funding, technical services, and other resources to farmers.

For example, farmers in Peirick’s group can get a base payment of $15 per acre for planting cover crops from the Fox Lake Inland Lake Protection and Rehabilitation District. They get an additional $10 per acre for doing no-till. The group also recently received nearly $40,000 in grant money from the Wisconsin Department of Agriculture, Trade, and Consumer Protection.

In Dane County, southwest of Dodge County, Wade Moder, the executive director at Upper Sugar River Watershed Association, said he has found common ground with farmers over the years.

“It turns out that we’re all human beings, and we all have reasons for why we do things,” Moder told The Epoch Times. “Once you start talking and understanding each other, a lot of those hostilities or misconceptions crumble down pretty quickly.”

The overture to farmers came in 2015, when Moder and his co-workers were doing the strategic planning for the year. They realized that 60 percent of the land in their watershed is farmland, yet they had made almost no connection with farmers in their environmental work.

Soon, Moder drove to a dairy farm and talked to the owner, Brian. That first conversation led to the next one, and many more. Moder used to question why farmers were not doing more protecting the environment. Gradually, he learned to look at environmental protection from a farmer’s perspective.

“Farming is a very, very difficult livelihood. All the risks, mother nature being number one—the weather, low milk prices …They’re trying to run a business with razor-thin margin, then on top of that, we are asking them to do conservation measures,” Moder said.

About five or six months after the first conversation with Brian, Moder learned about the new grants from Wisconsin Department of Agriculture, Trade and Consumer Protection to support farmer-led conservation efforts.

He helped secure the first grant for farmers in the Upper Sugar River watershed. Six years later, 30 farmers have taken up conservation practices through the watershed group. This year, they will experiment with a new program to reduce the use of nitrogen on farmlands.

“My role in the group is really a glorified secretary. I organize the meetings for them, I take the minutes, I order the pizza, but I don’t do any of the program planning. It’s up to the farmers to decide what’s important to them,” Moder said. “We stand in the background, and we help when needed, but it’s their group.”

Working with farmers over the years, Moder discovered that they are very observant and receptive to new ideas, as long as those ideas are presented in a neutral and noncombative manner.

“There are times when people are passionate about the environment; they do things like telling farmers what do to,” he said. “I think we all just need to be more inclusive to one another, and we’ve found through this group is that there is far more common ground than there is otherwise.”