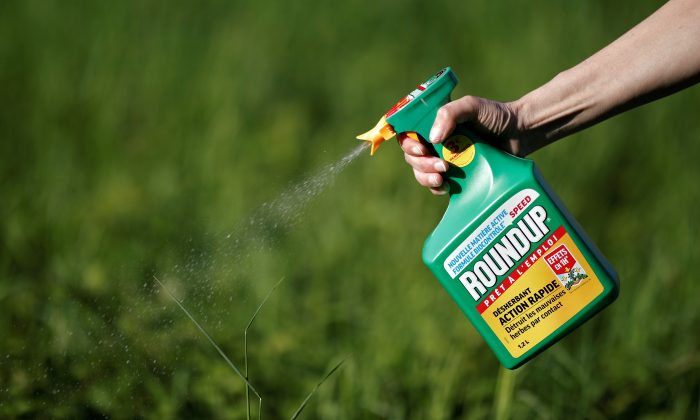 A gardener uses a Monsanto's Roundup weedkiller spray without glyphosate in a garden in Ercuis near Paris, France, on May 6, 2018. (Benoit Tessier/Reuters)
Judiciary

A coalition of 54 agriculture groups is urging the Biden administration to drop its support for allowing states to impose their own warning labels—in addition to federal labels—on consumer products.

In the appeal, chemicals giant Bayer Aktiengesellschaft (Bayer AG) is asking the high court to overturn an appeals court ruling that upheld awarding damages to a customer blaming his cancer on Roundup, as The Epoch Times previously reported. Roundup is a glyphosate-based weed-killer that has been on the market since the 1970s. The petition was filed with the court in August 2021, but the justices have yet to act on it.

In the litigation, Bayer reached a settlement deal in principle with plaintiffs in 2020 but failed to secure court approval for a separate agreement on how to handle future cases.

Monsanto, based in Creve Coeur, Missouri, was purchased and absorbed in 2018 by Bayer AG, a multinational pharmaceutical and life sciences company based in Leverkusen, Germany, for $63 billion.

Cancer patient Edwin Hardeman is a Roundup user in California who was awarded $25 million in damages against the company. He blames Roundup for his non-Hodgkin lymphoma. The appeal came last year after the U.S. Court of Appeals for the 9th Circuit rejected the company’s appeal of the verdict in favor of Hardeman.

The circuit court held that the Federal Insecticide, Fungicide, and Rodenticide Act (FIFRA) didn’t preempt a California law requiring Roundup and other products containing glyphosate to feature disclosures about that chemical’s reported cancer risk. California considers glyphosate to be carcinogenic, but the U.S. Environmental Protection Agency (EPA), which enforces FIFRA, does not.

Bayer argued in its petition to the Supreme Court that claims that Roundup causes cancer in humans lack scientific foundation. The circuit court’s “errors mean that a company can be severely punished for marketing a product without a cancer warning when the near-universal scientific and regulatory consensus is that the product does not cause cancer, and the responsible federal agency has forbidden such a warning.”

In a friend-of-the-court brief (pdf) Prelogar filed with the Supreme Court on May 10, the Biden administration argued that the 9th Circuit “correctly held that FIFRA does not preempt respondent’s claims, and that decision does not conflict with any decision of this Court or another court of appeals.”

The new position articulated by the solicitor general, that is, that federal law and regulations don’t prevent states from imposing their own labeling requirements, even if those labels run counter to federal findings, “is a stunning reversal from previous, bipartisan administrative policy,” the coalition said in a statement.

The new policy explained in the brief “would set a dangerous precedent that threatens the science-based regulatory process.” The members of the coalition worry that “this new policy, along with having environmental impacts, could ultimately hinder the ability of U.S. farmers to help meet growing global food needs intensified by the invasion of Ukraine.”

Industry leaders shared their views in the coalition statement.

Brad Doyle, president of the American Soybean Association, stated: “Federal law is clear that pesticide labels cannot be false or misleading. Allowing states to require health warnings contrary to decades of sound science is beyond disturbing and obviously not in line with federal law.

“Farmers are concerned this new policy will open the floodgate to a patchwork of state labels that will undermine grower access to safe, effective pesticides needed to farm productively and sustainably.”

Prelogar’s office didn’t respond to requests for comment over the Memorial Day weekend.

Nathan Worcester contributed to this article.