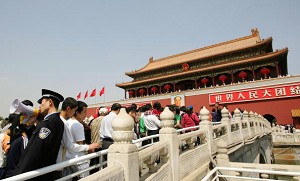 According to a report by Hong Kong's Mingpao newspaper, a farmer went to Tiananmen Square, Beijing on August 6 and publicly cut his abdomen with a knife.

His apparent suicide attempt came after he had unsuccessfully appealed to the government on numerous occasions for just compensation for the appropriation of his, and others, farmland. After being admitted to hospital, he remains in critical condition.

The report quoted information, revealed by insiders, that the farmer was Yang Zhangjun from Xilong village, Changsha City, Hunan province.

In the early part of this year, with the approval of the local land department, local authorities acquired more than 16 hectares of farmland from Xilong village to build a sewage treatment plant.

The land appropriation met with strong opposition from the villagers who felt that the taking of their farmland was not only against the law, but was also an encroachment on the farmers' right to use the land for farming and their permanent contractual rights to the land.

Villagers pointed out that the required 30-plus million yuan (US$ 3.7 million) in compensation fees for the land acquisition was not paid to the farmers in accordance with state regulations.

In addition, the several million yuan (several hundred thousand US$) due in compensation fees for damaged young crops and rebuilding vanished without a trace.

Therefore, the villagers elected representatives to make appeals and negotiate with the government to get their due compensation. Yang was one of the representatives.

Starting early this year, Yang Zhangjun and the other representatives visited various levels of government, including municipal and provincial governments, to make their appeal. They also went to Beijing four times.

Not only was the problem unresolved, the representatives in the group were harassed by the local government authorities using their political power and the police department. One representative has not been able to go home for seven months because the police were searching for him.

Yang Zhangjun left home to escape police harassment and eventually went to Tiananmen Square on August 6 to make a statement by committing suicide.

In a letter written before leaving for Beijing, Yang stated that as an elected representative of the villagers, he had appealed for several months from local to central authorities in protest against the underhanded way the land acquisition had occurred.

Not only did his appeals fail to bring any results, he was actually arrested by the police. He felt that his only recourse was to shed blood on Tiananmen Square for his fellow villagers. In his letter he also said to his wife, “my death was caused by corrupt and greedy officials who forced me to seek death as the only way out.”