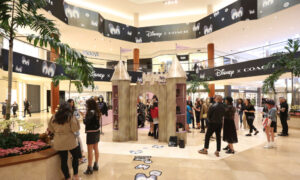 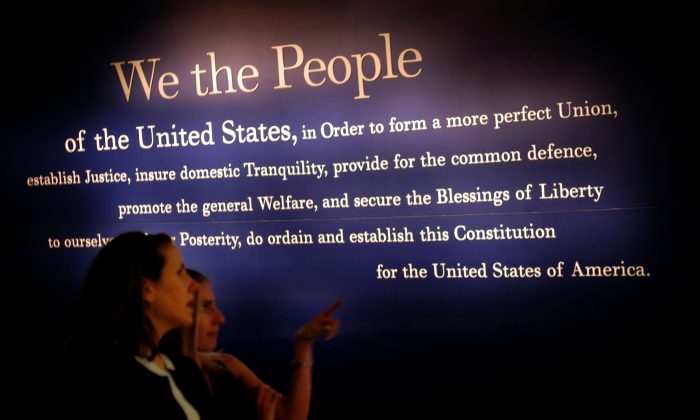 Two women walk past a painting of the beginning of the U.S. Constitution during a preview of the National Constitution Center in Philadelphia, Penn., on July 1, 2003. William Thomas Cain/Getty Images
Viewpoints

Farewell to the 1st Amendment?

As all American students learn, the First Amendment to the Constitution protects freedom of expression. So precious was this idea to the founding fathers that they assigned it first place in the Bill of Rights. This freedom—the right to unfettered speech, and the right to communicate one’s thoughts and opinions—has enabled America to thrive as a democracy unlike any in history. Unfettered until now, that is.

In the past, scholars of the First Amendment were unanimous in their belief that all ideas, regardless of how offensive they may be, should be permitted to see the light of day—if for no other reason than, in the words of Justice Louis Brandeis, “Sunlight is said to be the best of disinfectants.”

But the tide is turning; the radicals of the ’70s are now the scholars of the 2010s, and many of them espouse the tenets of the socialist political philosopher Herbert Marcuse. He argued for repressive tolerance, the need to limit speech that may be harmful to society. But who is to decide this need?

The immediate danger is not from government regulating or intimidating speech. Though we may worry about the “chilling effect” from government censorship or the threat thereof, it is the corporate boardrooms that have already taken the initiative of limiting the data we need, offensive as its source may be, to make informed judgments. Thereby they limit as well our ability to perceive the world as it truly is, unscrubbed and real, a world that is often offensive to one’s sensibilities.

Private actors (as distinguished from governmental ones) controlling speech are the immediate threat to the principles of the First Amendment. Social media sites have taken it upon themselves to be the arbiters of what the masses will be allowed to see and hear. YouTube, Twitter, and Facebook, among others, are promulgating policies to limit content.

But are they to be trusted to draw the fine distinctions between hyperbole and true threats? My answer is a loud “NO,” based on an experiment by the Israel Law Center in December 2015 testing Facebook’s neutrality. The center found two existing Facebook pages, one pro-Palestinian and the other pro-Israeli, and posted content to each that incited violence and hatred. The anti-Israeli messages were deemed within the bounds of Facebook content policy, while the anti-Palestinian messages were taken down.

Ingraham may be rigid in her adherence to hardline policies on issues such as immigration, and she has demonstrated a tendency to apply ideology without any flexibility, regardless of the reality on the ground.

But her views are counter-balanced by MSNBC host Rachel Maddow’s apoplectic assaults on what she perceives as President Donald Trump’s coddling of President Vladimir Putin. (Her comments were contemporaneous with the White House’s expulsion of Russian diplomats and expansion of sanctions against Russia.)

Having both commentators express their contrary and apparently irreconcilable opinions permits viewers with sufficient understanding of the topic at hand to apply critical judgment and reach their own, independent, conclusions.

In Ingraham’s case, the vehicle for her expression of controversial opinions was nearly shut down, not by an intolerant government, but by intolerant private actors seeking to silence opposing viewpoints indirectly through organizing the application of financial pressure via advertisers on her network—pet food company Nutrish, TripAdvisor, and Hulu being among the first to announce they would no longer place ads on her show.

Surprisingly, in a time when principled backbone seems to be a relic of better days, her boss at Fox News, Jack Abernethy, refused to cave, saying, “We cannot and will not allow voices to be censored by agenda-driven intimidation efforts.”

Political speech from jihadists and neo-Nazis alike, while hateful, loathsome, and offensive, is not a crime. Censoring such speech, whether public or private, must lead inexorably to a time when your posts, tweets, letters to the editor—when all your public statements—will be subject to review by others, by those who profess to know better.