Farewell Democracy: Civic Party to Dissolve as No One Wants to Become Next Chairperson After National Security Law Mass Arrest 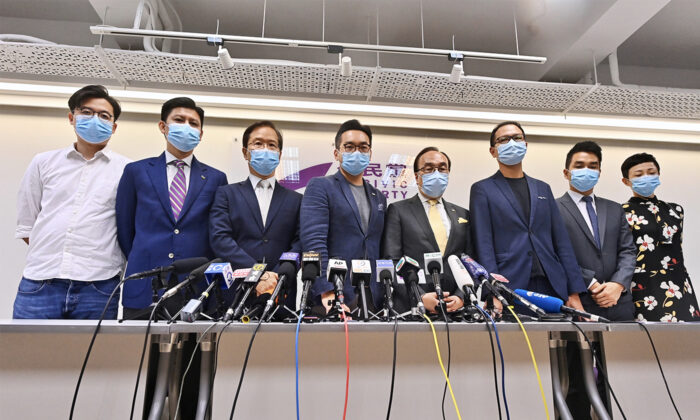 The 16-year-old Civic Party will enter a liquidation process. The picture shows The Civic Party holding a press conference in 2020 in response to the disqualification of legislators. (Sung Pi-Lung/The Epoch Times)
By Nie Law

Nie Law
Nie Law is a contributor to The Epoch Times with a focus on Hong Kong-related topics.
View profile
, Ying Cheung

Hong Kong’s two major pro-democracy bodies, The Civic Party and The Democratic Party, have entered a new phase with the Civic Party not receiving any nominations for its executive committee by the deadline of noon on Dec. 3; therefore, it has no choice but to close. Meanwhile, The Democratic Party has selected its new Central Committee and will press forward; but might soon face the same fate: dissolution.

The Civic Party, with a history of serving Hong Kong for over 16 years, is about to hold its 17th annual meeting on Dec. 17. In the previous month, the party’s current chairman, Alan Leong Kah-kit, made clear that the party would enter liquidation if no one ran for the party’s executive committee.

On Dec. 4, Leong Kah-kit confirmed that the party had not received valid nominations. According to the party’s current policy, without a new chairperson, the executive committee will become a temporary committee for less than one year to complete its dissolution.

The temporary executive committee will then handle the dissolution by appointing a liquidator and setting a timetable for the special member conference. Leong said dissolution must be approved by at least 75 percent of attending members.

Leong pointed out that the only chance for the party to turn around was if someone took over the temporary executive committee, but looking at the political situation in the past 18 months, he firmly believed that dissolution was the only way.

When Hong Kong’s Civic Party was founded, it was dominated by legal professionals. It won six seats in the 2012 Hong Kong Legislative Council election, following the pro-government parties, the Democratic Alliance for the Betterment of Hong Kong (DAB), and the Trade Union. The Civic Party tied in second place with The Democratic Party.

The Civic Party also surpassed The Democratic Party in the direct district election and became the most significant pro-democracy camp in 2012.

Scholar Wong Wai-kwok believes that the rise and fall of The Civic Party represent the rise and decline in the rule of law; Political party disbandment is proof of the death of law and order in Hong Kong.

Wong warns the party’s dissolution will mean zero opposition to the government in Hong Kong, “whoever supports democracy, freedom, and justice will soon disappear from the political circles in Hong Kong. There will be only state media and government voices left.” Wong added.

On the other hand, the only nominated candidate of The Democratic Party, Lo Kin-hei, was re-elected successfully as the new chairman at the annual member meeting held by the Democratic Party on Dec. 3. Lo said he could not rule out that The Democratic Party would face the same fate as The Civil Party regarding disbandment, “For now, we will continue to do what we can and speak for Hongkongers,” Lo added.

Lo stressed that since the establishment of the United Democrats of Hong Kong in the 1990s, The Democratic Party has committed to district work. The re-elected chairman reassured the public there is still room for the party to contribute, regardless of the government’s opinion.

The Civic Party has had a long history in democratic work.

Set up on Mar 19, 2006, the work of The Civil Party, formerly known as the “45 Concern Group,” can be traced back to its discussion of implementing universal suffrage in 2007.

The Civic Party also opposed the draft of Article 23 of the Basic Law in 2002. The Civil Party was nicknamed “The Lawyers’ Party,” as its backbone primarily consisted of legal representatives.

Its founding manifesto mentioned that the societal issues arising in people’s livelihood and governance in Hong Kong, the challenges to the rule of law and constitutional system, and the unreachable universal suffrage cause stagnation and stifling emotions for Hong Kong citizens.

The Civic Party also believed that it is necessary to address the gaps and create unity, to develop a new system of Hongkongers governing Hong Kong with a high degree of autonomy under China’s sovereignty and under “one country, two systems.”

The party declared, “Under provisions of the Basic Law, the Chief Executive of Hong Kong and the Legislative Council should be elected by universal suffrage, and the elected candidates should uphold the rule of law.”

The Basic Law stipulated that the government should ensure all Hong Kong residents have absolute freedoms and rights guaranteed by relevant international conventions.

The manifesto also pointed out “the party’s commitment to communicating closely with the central government.” The Civic Party also vowed to build partnerships with civic society while actively encouraging all sectors of life to participate in public affairs.

By 2016, the party released its Tenth Manifesto, which centered around locality, independence, and pluralism.

It mentioned that “One Country, Two Systems” is deforming, and the party is determined to make long-term preparations. The members of the party vowed to defend Hong Kong’s human rights and interests, protect the value of the city, and maintain the overall well-being of Hong Kong.

The party was committed to corresponding closely with the central government, but unfortunately, the regime “is only concerned about the One Country, but not Two Systems.”

The Civil Party also spoke of how the central government’s policy had impacted the uniqueness and integrity of Hong Kong’s system, “If necessary, the party will resort to civil protests to resist the collapsed system.”

One hopeful moment was when Former Legislative Council member and current president of The Civic Party, Leung Ka-kit, joined the race for the 2007 chief executive election. At the time, Leung even got the blessing from Beijing to compete with Donald Tsang Yam-kuen, who was seeking to be re-elected. In the end, Leung lost to Tsang with 123 votes versus 649 votes.

In 2010, five lawmakers, former members of the Legislative Council (LegCo) of the Civic Party and the League of Social Democrats, resigned and launched the Five Constituencies Referendum. They wanted to initiate LegCo by-elections with a de facto referendum on genuine universal suffrage and the abolishment of functional constituencies.

In the same year, on the eve of the Legislative Council’s vote on the political reform plan proposed by the Hong Kong government, Audrey Eu Yuet-mee, the then-leader of The Civic Party, was invited by then-Chief Executive Donald Tsang to participate in a TV debate on political reform.

The HKU survey pointed out that 70 percent of the respondents thought that Tsang did not perform as well as Yu, a senior barrister and only 15 percent thought Tsang did well.

However, the proposed political reform was approved on May 24, 2010, after a secret negotiation meeting held between The Democratic Party and the Hong Kong Liaison Office.

The Rise of Democracy

As for legislative Council elections, after the establishment of the Civic Party, it became the second-largest party following The Democratic Party.

The Civic Party won all seats in five sectors. In addition, the party also pocketed every seat of the functional constituencies in the legal sector.

The Beijing government imposed the Hong Kong National Security Law in July 2020; members resigned from The Civil Party and their duties at Legislative Council one after another. The party no longer has seats in the district council.

Members of The Civil Party were disqualified in the LegCo election 2020. Alvin Yeung Ngok-kiu, Kwok Wing-hung, and Kwok Ka-kei were disqualified when they sought re-election. They were accused of opposing the National Security Law, seeking foreign intervention, and refusing to recognize China’s sovereignty or Hong Kong’s constitutional status. Beijing announced that they had lost their seats.

It triggered a ripple effect of resignation from pro-democracy legislative councilors.

The four members resigned from the party while being detained. They also sent an open letter to its former fellow members, stating they had already proposed disbanding The Civic Party during their bail period.

Following the disqualification of Civil Party members, the Civic Party had zero room to participate in politics at the Legislative Council, and its fate was written on the wall: The Civic Party had completed its historical mission.

Although it tried to reorganize, the CCP clamped Hong Kong down with “patriots governing Hong Kong” and overhauled the electoral system forcefully.

The Chinese government completely clamped the right to modify the voting and election methods of the Chief Executive of Hong Kong and the Legislative Council.

As universal suffrage is nowhere in sight, the end of The Civic Party also becomes the last song people will hear of democracy in Hong Kong.

Nie Law
Nie Law is a contributor to The Epoch Times with a focus on Hong Kong-related topics.