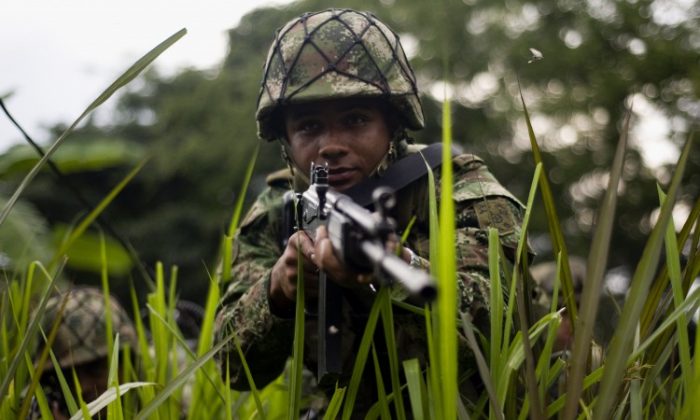 Colombian soldiers conduct a patrol across a field in a mountainous area in Miranda, Cauca department, Colombia, on January 18, 2012. The Colombian army created the Apolo joint task force with area of influence located in the southwestern department of Cauca. TF Apolo is responsible for fighting the Revolutionary Armed Forces of Colombia (FARC). (Luis Robayo/AFP/Getty Images)
World

FARC Leader Claims It Is Not Weakened

The Revolutionary Armed Forces of Colombia (FARC), the Marxist rebel group that is both the largest and oldest in the country, denied reports that it has been weakened, days after it released 10 hostages who were held for more than a decade.

In a video that was posted on YouTube in recent days, the group’s leader, Ivan Marquez, said FARC “is not weakened,” as claimed by Colombian President Juan Manuel Santos.

The video showed what appeared to be a few hundred men clad in military uniforms shouting slogans and raising their weapons in the air in a densely wooded area.

FARC is considered a terrorist organization by the U.S., the European Union, and Colombia and has battled with Colombia’s army for five decades. The group has been blamed for a number of kidnappings as well as drug trafficking in the country and is said to be holding a large number of hostages, although the exact number is unclear.

The group is also believed to have employed or is using child soldiers, torture, and has committed extrajudicial killings, which have affected a number of nearby civilians, according to a United Nations report in 2005. FARC is also believed to have used antipersonnel mines—a weapon that is mostly internationally banned—and to have used terrorist attacks that have killed a number of civilians.

The group was founded in 1964 and is funded primarily through drugs, extortion, and mining, in areas that it controls.

Marquez, according to a translation from Colombia Reports, said that “what does exist is an intense political and military confrontation and a growing mobilization of the social sectors.”

“The revolutionary violence, the rebellion against unjust and tyrannic regimes is an irrevocable universal right,” he said, adding that the U.N.’s charter gives the group the right to rebellion.

The announcement comes as President Santos said he would be willing to personally speak with representatives from FARC, but said that there has not been much progress under the group’s current leadership, according to a recent interview published by the Brazil-based Epoca publication.

“If there is a willingness on their part … I would make peace with the guerrillas directly, but that requires a true manifestation of will, because past experience with the peace process has been very negative,” he said in the interview. “The guerrillas have always used these moments to gain more time and room to breathe.”