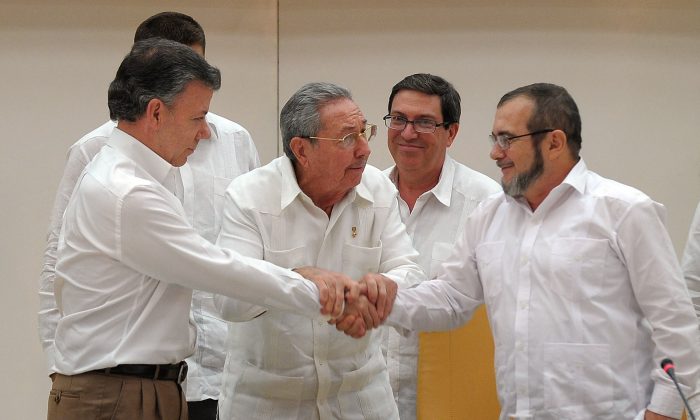 Colombian President Juan Manuel Santos (L) shakes hands with the head of the FARC guerrilla Timoleón Jimenez, aka Timochenko (R), as Cuban President Raúl Castro (C) holds their hands during a meeting in Havana on Sept. 23, 2015. The Colombian government and FARC rebels announced a key breakthrough in their nearly three-year peace talks Wednesday, Sept. 23, with the signing of a deal on justice for crimes committed during the five-decade conflict. The deal includes the creation of special courts and a broad amnesty, though this will not cover ‘crimes against humanity, serious war crimes,’ and other offenses, including kidnappings, extrajudicial executions, and sexual abuse, said officials from Cuba and Norway, the guarantors in the talks. (Yamil Lage/AFP/Getty Images)
Americas

It has now been a little more than three years of lies, secret deals, and broken promises since the so-called peace process between the Colombian government and the Revolutionary Armed Forces of Colombia (FARC) started in Havana, Cuba.

It culminated on Sept. 23, when Colombian President Juan Manuel Santos and Comrade Timoleón Jiménez (aka Timochenko)—the head of the FARC guerrilla—announced the agreement that would end the conflict. They shook hands as friends under the smiles and applause of the dictator Raúl Castro and a few select guests.

All throughout the “peace” process, the FARC narcoterrorists have not fulfilled a single promise.

They murdered police and military officers, engaged in acts of terrorism, kidnapped innocents, recruited minors to serve as cannon fodder, and even conducted attacks on the capital of Bogotá. Santos took no repressive action and continued the charade as if nothing had occurred. This is because the narcoterrorists are the ones who have commanded and given orders in this ill-fated “peace” process.

Last year, Santos announced that he would expand the definition of “political offenses” to include drug trafficking. This allowed the FARC to claim in its favor—as they already did—that they are not drug traffickers but “political actors.” The population reacted vehemently and Santos denied he had made the proposal. But evidence was documented in newspapers and video footage.

This was one of the arrangements Santos made with the FARC, along with an agreement that he would protect the group’s guerrilla leaders from extradition to the United States.

To go around what is stated in the constitution, Santos proposed—like former Venezuelan leader Hugo Chávez and his successor Nicolás Maduro—that Congress pass a law allowing him to rule by decree for a period of six months. This way, he could dictate the implementation of the agreement without opposition from Parliament, the courts, and the people, and even without complaint or interference from the International Criminal Court.

What is being engendered in Cuba is a crime of high-treason—the total and irreversible surrender of Colombian democracy to criminals.

What is being engendered in Cuba is a crime of high-treason—the total and irreversible surrender of Colombian democracy to criminals. They committed crimes against humanity that will go on completely unpunished, because they won’t be judged by common law but by a special law and an ad hoc court composed of unspecified magistrates.

Of what is known—because the public is not informed of all the agreement’s contents, only what the FARC allows is disclosed—the serious crimes won’t be properly punished, with sentences ranging from only 5 to 8 years. The sentences will not be served in prison, but in offices, farms, and other open places where the criminals will have freedom to perform “social work.”

That is if they admit their guilt. Otherwise, the penalty increases to a maximum of 20 years in prison, a law tailored to their interests, as it is clear that everyone will plead guilty to undergo light penalties.

What about reparations for thousands of victims and the end of their involvement in the drug trade and manufacture? No way! None of this was contemplated in the agreement. The government did not consider seizing the billions in assets accumulated by the FARC—earned at the cost of more than 200,000 victims over 50 years.

The political candidacy for any government position is guaranteed for both the guerrilla members and the heads of the FARC’s secretariat.

In addition to these aberrations, military and police officers will be judged on the same terms as narcoterrorists in trial, putting those who defended their homeland and the attackers in the same bag. A formal and comprehensive review of the nation’s military doctrine will also be drawn up to “adapt” the armed forces to the new so-called post-conflict era.

Just 24 hours after this macabre show in Havana, ANNCOL—a Sweden-based, pro-FARC media—was already threatening bankers, industrialists, businessmen, ministers, and the former Colombian President Alvaro Uribe Vélez (2002–2010), claiming they should “welcome the Special Jurisdiction of Peace,” and that Uribe should also “confess, repay the ‘victims,’ and re-socialize.”

Meanwhile, the free world applauds and congratulates the traitor Santos and the FARC. The U.S. government supported the agreement in Havana, though at home it did not tolerate bin Laden’s continued terrorist activity. The presidents of Venezuela, Bolivia, Ecuador, Brazil, Argentina, Nicaragua, and other countries that participate in the São Paulo Forum—a platform that aims to establish a socialist-communist bloc in Latin America—applauded loudly, because they are partners and accomplices of the FARC.

In Havana, it was agreed that within six months the agreement will be signed by the parties and enter into force. Already many Colombians are saying that the worst thing to happen to Colombia was not the war, but the peace forged by Santos—the peace of the cemeteries.

Graça Salgueiro is a Brazilian psychologist and independent journalist specialized in Latin American politics. Over the years she wrote for various publications, hosted radio programs, and gave lectures on the Latin America leftist movements and strategies. This article was previously published on Jornal Inconfidência. Republished with permission from Mídia Sem Máscara.