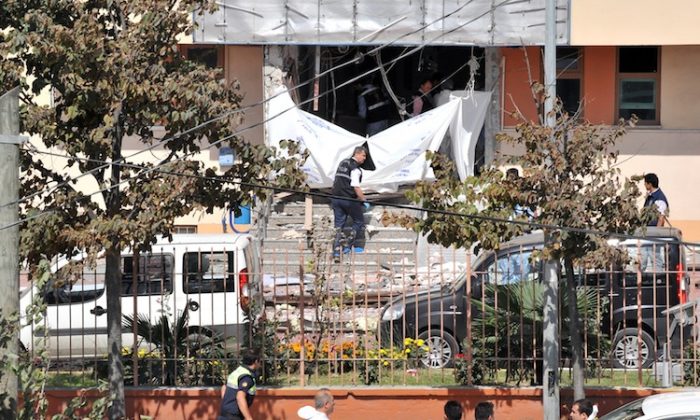 Police forensic officers inspect the site in front of the Sultangazi district police station following an attack on Sept. 11, in Istanbul. At least one police officer died and five people were severely wounded on Tuesday. (Bulent Kilic/AFP/GettyImages)
Middle East

An Istanbul police station was rocked by a bomb that was set off by a militant belonging to a far-left extremist organization, killing one officer, Turkish police said.

The Revolutionary People’s Liberation Party-Front, a Marxist-Leninist party known as Dev Sol, which has been blamed for at least one suicide bombing in the past, said one of its members carried out the attack on Tuesday, Reuters reported. A security official told the news agency that the group was likely responsible.

The group wants to set up a communist state in Turkey and is vehemently against the current government, the United States, and NATO. It has been deemed a terrorist organization by the United States and by Turkey.

“The suicide bomber set off the explosives he was wearing after throwing a grenade into the police station, killing one police officer and wounding four others at the entry,” Istanbul police chief Huseyin Çapkin told reporters at the scene reports the Hurriyet Daily News. The bomber was killed in the blast.

Seven people, including three civilians and four officers, were injured. The officer killed was identified as Bulent Ozkan. Ozkan was planning to get married in five days, the publication reported.

The assailant was identified as Ibrahim Cuhadar, who was a known member of the Party-Front, and had previously served eight months in prison.