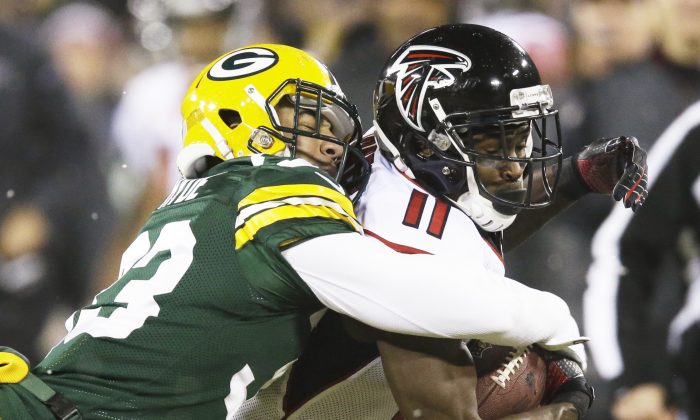 Right now the biggest name on the list is Jones, as owners could really use his WR1 value for the fantasy finals.

ESPN Falcon’s Vaughn McClure reports that Jones was not spotted at the beginning of Thursday’s practice, and it’s looking like he will once again be a true game-time decision. Owners need to stay glued to the news Sunday morning. Until then, they’ve got to pick up Harry Douglas, who pretty much eats up Jones’ targets when he’s out. Douglas had 10 catches for 131 yards in Week 15.

If Douglas is already gone, perhaps give guys like Marques Colston, Charles Johnson, or Jarvis Landry a look.

Despite undergoing surgery on his hand on Monday, Murray practiced on Wednesday, albeit with his surgerically-repaired hand wrapped.

Murray will definitely try to play with the Cowboys trying to clinch the top seed in the NFC, but like Jones, he too looks like a true game-time decision. If he plays, owners will have to start him; its been a magical season for Murray.

Newton is still likely to suit up Sunday though; there’s a lot hanging on the line in the Panther’s battle for supremacy in this year’s miserably bad NFC south.

Hilton was not spotted at practice Thursday, which is concerning considering that he was expected to make an appearance. Hilton’s status is uncertain for Week 16, and it’s looking entirety likely that he could sit this week out.

The Colts are behind the Broncos and Patriots in their fight for the AFC’s top seed.

Both Gore(concussion) and Carlos Hyde(ankle-back) remain sidelined at practice. On a short week(Saturday game), it looks more and more like Alfonso Smith will be carrying the ball Sunday for the 49ers.