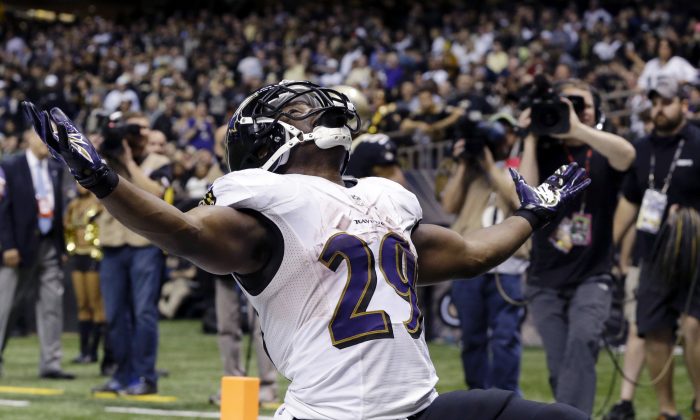 Baltimore Ravens running back Justin Forsett celebrates his touchdown carry in the second half of an NFL football game against the New Orleans Saints in New Orleans, Monday, Nov. 24, 2014. The Ravens won 34-27. (AP Photo/Jonathan Bachman)
NFL

Here is a look at the risers and fallers on the fantasy football stock market for Week 13. Note that popular waiver wire adds of the week are not included, as these players are obviously stock climbers by virtue of popular demand. If you missed out on this week’s top adds, you may see them here.

The magical season continues for the career journeyman Forsett, having amassed a staggering 294 yards and two touchdowns in his last two. Forsett is on pace for over 1300 yards and 10 touchdowns on the season. Having fully controlled the Ravens backfield and red hot, it is precisely this point in the season that he’s at his statistical climax. Forsett is a low end RB1 for Week 13, where he has a good chance to break the 1000-yard season rushing mark for the first time in his career.

After Montee Ball got hurt, it looked like Ronnie Hillman was the real deal in the Broncos backfield. But now with Hillman hurt, Anderson is picking up right where Hillman left off and more, amassing a Broncos RB season high 195 total yards against a stout Dolphins defense in Week 12. Anderson owns a complete skill-set at running back — in particular he a big option in Peyton Manning’s passing game, and is absolutely a mid-range RB1 for Week 13.

Tannehill’s stock has slowly been on the rise, albeit under the radar. The numbers speak for themselves when it comes to Tannehill, though you may be surprised if you haven’t been paying attention. This week, many experts have Tannehill ranked as a low end QB1 as the next option right under the big names of the position(Brees, Manning, Brady, etc.).

The hype for Beckham has gone through the roof after his ridiculous one-handed catch in Week 12, so I don’t think I’ll have to elaborate on his surging stats. Beckham has now officially graduated from WR2 status and is a weekly low-end WR1.

All the hype has been on DeMarco Murray, but Romo has been quietly having a fantastic season, and the 8-3 Cowboys are surging. Beckham may have made the play of the night on Sunday night, but it was the Cowboys that won the game, in big part due to 275 yards passing and a whopping four touchdowns from Tony Romo. Romo will be one of the very best quarterback options of the week on Thanksgiving versus the Eagles.

JC has missed the last couple of weeks due to injury, but the tight end’s chances of suiting up in Week 13 are promising. With the WR phenom Josh Gordon back to clear the middle of the field, the 2013 pro-bowler Cameron could be a major steal during the final weeks of the season in a woefully weak year for tight ends.

Maclin’s fantasy play has not been the same since Mark Sanchez took over, with Sanchez more inclined towards the rookie Jordan Matthews. With the switch from Nick Foles to Mark Sanchez at the helm, Maclin’s targets per game have dropped from 10.3 to 8.6. Maclin is a now a weekly WR2 rather than a WR1.

Kaepernick has been sliding slowly for many weeks now, but its time to note just how far he has fallen, along with other ‘big names’ such as Phillip Rivers, Jay Cutler, and Cam Newton. All of the aforementioned QBs are the bottom barrel of QB2s for Week 13, while having been replaced by guys like Tony Romo, Ben Roethlisberger, and Ryan Tannehill.

Similar to the situation with Lamar Miller, injuries have ruined Bernard’s fantasy prospects by virtue of having completely opened the door for other backs on the team. In other words, Jeremy Hill’s role will not be relegated anytime soon; in fact, Hill was the play for all of the Bengal’s goal-line chances in Week 12 versus the Texans. Formerly a low-end RB1, Bernard is now a low-end RB2 behind his teammate Jeremy Hill.

Jones still has a favorable schedule, and has the talent to break out at any moment, but time is running out for the Falcon’s star wideout. Posting pedestrian stats(he scored his first touchdown since Week 3 in Week 12) while others are his position are exploding(Beckham, Evans, Thomas, etc), Jones is gradually losing his place in the survival of the fittest of the WR position. Formerly a top WR play, Jones is more a weekly WR2 now, albeit at the top of the WR2 list.