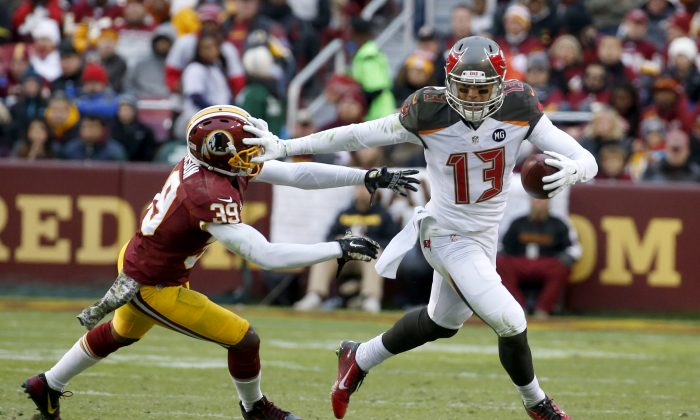 Here is a look at the risers and fallers on the fantasy football stock market for Week 12. Note that popular waiver wire adds of the week are not included, as these players are obviously stock climbers by virtue of popular demand. If you missed out on this week’s top adds, you may see them here.

Mike Evans has completely trumped Vincent Jackson as the team’s top receiver. The 7th overall pick in the 2014 NFL draft now exploded for five touchdowns and 458 yards(152.6 yards a game) in his last three. Granted, the quarterback situation in Tampa Bay is not ideal, and defenses will start focusing on Evans sooner or later, but for now his fantasy play is at a peak level. Evans is a top of the line WR2 in Week 12.

Following the lead of Evans, Beckham is another transcendent rookie receiver. After losing Cruz, Beckham has become entrenched as Eli Manning’s favorite target. Beckham has drew over 10 targets in each of his last three games and to show for him, has totaled 357 yards in that span(119 yards a game). Like Evans, Beckham is a top of the line WR2 that should become a top WR option in fantasyland a year or two down the road.

Mason has secured the running back job in St Louis, handling 29 carries for 113 yards in the Rams’ upset shocker over the Broncos. Mason’s schedule in the fantasy playoffs is very enticing, so the rookie out of Auburn is fast becoming a mainstay RB2.

This year has been another disappointing year for Richardson – both on the field(where his been outplayed by Ahmad Bradshaw), and in fantasy. However with Bradshaw suffering a likely season-ending injury, this is an prime opportunity for the former #3 overall pick to prove himself once again.

Lacy isn’t getting a lot of rushing volume, and is losing some touches to the likes of James Stark, but his stock is still rising due to the exorbitant play of Aaron Rodgers elevating the play of all Packers skill players. Lacy has started to become heavily involved in the passing game, totaling 236 total passing yards and two passing touchdowns over the last three.

Fans were chanting for Colt McCoy at the end of Week 11’s game versus the Buccaneers, so you can imagine how much RGIII has fallen. He is light years behind the development of Andrew Luck right now, and his bad play on the field is reflected in his barely holding QB2 value in Week 12’s quarterback rankings.

Jonas Gray ran for 199 yards and four touchdowns Sunday Night, and Vereen was relegated to the gutter with only one carry. At least he was still pretty involved in the passing game, and down the line, the Patriots shouldn’t shut his rushing down completely — Week 11 was more riding Jonas’s hot hand than anything. But until we figure out what the Patriots are going to do, both Vereen and Jonas are RB2/RB3s.

Fans hoping for a big game from Rivers in Week 11 were burned when he only produced 193 yards and a touchdown. And this is the game following a bye where beforehand, he had hit bottom in Week 9’s contest with the Dolphins. Rivers gets the Rams next, a team whose defense is suddenly surging. Rivers is a middling QB2 this week, though owners hope to see him return to weekly QB1 sooner rather than later.