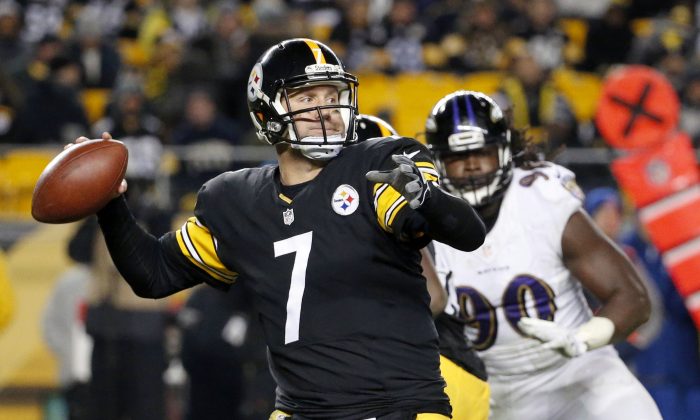 Here is a look at the risers and fallers on the fantasy football stock market for Week 10. Note that popular waiver waiver adds of the week are not included, as these players are obviously stock climbers by virtue of popular demand. If you missed out on this week’s top adds, you may see them here.

One 6-touchdown wasn’t enough for Big Ben, but two. If experts weren’t paying attention and called it a fluke last week, they are definitely paying attention this week. Its obviously assumed that Big Ben will fall back down to Earth — he won’t throw for 6 touchdowns every week. But experts are no longer straddling him as a QB2 — Big Ben is a middle of the road QB1 at this point in time.

Who would have thought that Denard Robinson, the former Michigan QB, would rush for almost 3 straight 100 yard games in perhaps the most incompetent offense in football? Well he has, and Robinson has proved to be miles ahead of Toby Gerhart, who had a disastrous stint at starter to open the season. Robinson is being pegged as middle of the round RB2 for Week 10.

Ingram was on this column last week, and after an 100-yard 2-touchdown performance Thursday versus the Panthers, he continues to scratch the surface of RB1 value. It certainly helps that Pierre Thomas and Khiry Robinson are injured though. Without them, there really is no one to compete with Ingram for carries.

Havin’s new team seems determined to get him involved to the maximum extent, and Harvin finished with 129 yards on 11 receptions in Sunday’s Week 9 loss to the Chiefs. Harvin is an immense talent no matter what team he plays for. Unfortunately, the Jets QB corps are probably the worst in the league, which thoroughly caps his upside.

In a weak year for tight ends behind the three kingpins of the position(Graham, Gronkowshi, Thomas), Kelce is quietly producing. After Week 9, he now has 4 touchdowns on the season.

After two very sub-par performances totaling just 378 yards passing and 1 touchdown, Wilson’s stock was bound to drop, especially considering the QB explosions in the fantasy football landscape(Brady, Roethlisberger) at precisely this time. Though Wilson always has upside due to his running ability, with so many QBs playing well, Wilson is more of bordeline QB1/QB2 than a solid QB1 at this time.

With Victor Cruz gone and Odell Beckham still a rookie, Randle was expected to develop into Eli Manning’s number 1 option and a reliable middle of the road WR2. So far, the targets have been there, but not the production, where Randle has been predominantly overshadowed by Odell Beckham. We are still waiting for that breakout game from the former No.1 high player in the country.

I don’t think I’ve ever seen an uglier stint for a running back than the last three weeks for Tate. Playing three very underwhelming defenses, Tate not only put up abysmal production(combined 65 yards on 1.59 yards per carry), but even lost the drivers seat at running back to Terrence West Sunday versus the Bucs. He will without a doubt be benched by owners until he or the Browns can find a way to jump-start the Browns running game.

Remember Doug Martin’s rookie year? This guy used to be the next best thing. What happened? Well, we all know injuries have something to do with it. As for this year, most don’t expect any noise from Martin in fantasy football for the rest of the year. He is being demoted to the waiver wire by vast amounts of owners.