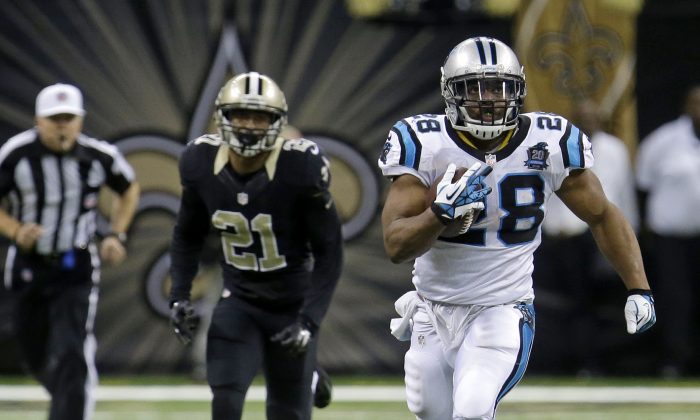 *This column ranks the most notable waiver wire pickups following Week 14 of the NFL season(Monday night game has yet to be played). These are general rankings based on player value and are not meant to be exact, especially between players of different positions. The players listed are all owned in less than half of ESPN 10-team standard leagues.

The Carolina Panthers finally showed up in Week 14, crushing the Saints 41-10. Taking advantage of committee partner DeAngelo William’s finger injury, Jonathon Stewart turned in a career day, amassing 155 yards on 20 carries, including a career-long 69 yard touchdown scamper. The Saints’ tackling issues definitely helped things, but things stay easy for Stewart in Week 15 when he get the Bucs. If Williams cannot go then, Stewart will be a solid RB2. If Williams can go, he still remains a nice RB2/FLEX option. As mentioned before, Daniel Herron is fulfilling the old Ahmad Bradshaw role, which would mean he is a weekly RB2/flex option. Latavius Murray came back from his concussion and dominated the Raiders backfield Sunday with 25 total touches. He will be a upside-back and a RB2/flex versus the Chiefs next week, a team he ran on for over 100 yards on just four carries in Week 12. Andre Ellington is out for the year, and nobody knew how the Cardinals backfield was going to be split, but it turns out Kerwynn Williams(off the practice squad) may be taking over lead back duties. Williams out-touched Stepfan Taylor 19-7 on Sunday. Its worth noting that the Cardinals have a brutal ROS schedule for running backs – they get the Rams on Thursday and then the Seahawks in Week 16, so Cardinal running backs are still unappealing. Andre Williams was another running back that turned in a great performance Sunday – 131 yards and a touchdown, but his value is directly tied to Rashad Jenning’s health. Guys like Jarvis Landry, Pierre Garcon, Charles Johnson, and Marquise Lee are all low-ceiling, WR3 types. Garcon is particularly appealing and gets a boost in value if Desean Jackson stays injured. On a Redskins-related note, it looks like RGIII is returning again. I still consider him to have upside, but at the same time its really hard to bank on that upside considering how awful his situation has been this year. Tight ends are crazy weak this year, so if you don’t own must-start tight ends like Gronk, Graham, Thomas, or even Bennett and Olsen, Josh Cameron is an attractive option. He was a pro bowler last year that has been plagued by injuries this year. If he stays healthy and produces even mid-round TE1 values the rest of the year, he would be a major steal off the wire. He has Josh Gordon back to clear the middle of the field for him, and hopefully soon he’ll have Johnny Manziel to spice up the passing game a bit, because Brian Hoyer has been having trouble delivering the ball. Finally, in regards to the waiver wire as whole, with fantasy football now entering its playoff phase, waiver wire pickups tend to pretty much useless if you don’t start them. In this vein, at this point it’s more relevant to pick up handcuffs(particularly running back handcuffs), as at least they would be must-starts if the guys in front of them get injured.