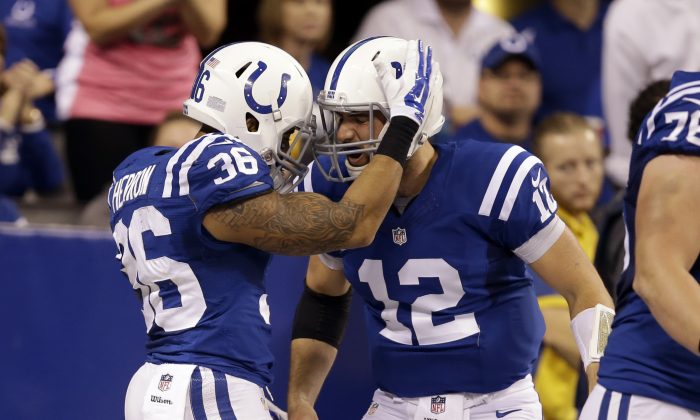 Indianapolis Colts running back Dan Herron, left, celebrates his 49-yard touchdown against the Washington Redskins with quarterback Andrew Luck during the first half of an NFL football game Sunday, Nov. 30, 2014, in Indianapolis. (AP Photo/Darron Cummings)
NFL

*This column ranks the most notable waiver wire pickups following Week 13 of the NFL season(Monday night game has yet to be played). These are general rankings based on player value and are not meant to be exact, especially between players of different positions. The players listed are all owned in less than half of ESPN 10-team standard leagues.

Boom Herron had 88 yards and a touchdown Sunday, and looks to be playing the role Ahmad Bradshaw had been playing. Bradshaw was a weekly RB2 before he got injured. On an afternoon where Jimmy Graham got no looks, Kenny Stills exploded for 162 yards and a touchdown. A breakout game from Stills was widely predicted among experts, and there is much appeal for him going forward. Namely, his quarterback is Drew Brees, and with Brandin Cooks out for the year, he could develop into Brees’s top option outside of Graham, which naturally equates to a lot of numbers. In an extremely weak year for tight ends, Jordan Reed could be a steal for owners struggling at the position. This too was something completely predictable — Colt McCoy has always had a penchant for the tight end. In McCoy’s two starts, Reed has had 18 targets. For those who missed it, Reed totaled 123 yards on nine receptions Sunday. Speaking of McCoy, he threw for 392 yards and three touchdowns in Robert Griffin III’s place, and could be an interesting QB2. In a tremendous, tremendous rookie receiver year, Donte Moncrief and Davante Adams have been quietly producing(quiet compared to the 1st round monsters) respectable numbers as the number three options in two of the most high powered offenses in the league. Davante Adams had 121 yards in Week 13, and Moncrief had 134 yards and two scores. However, they are a bit erratic, and are WR3/WR4s, albeit with upside.  Doug Martin showed he’s not completely washed up, rushing for 58 yards and a touchdown versus the Bengals(OK, that isn’t so impressive actually). Martin hasn’t been relevant for years, but is worth a flier. Ryan Fitzpatrick did throw six touchdowns on Sunday, but I think most understand well enough not to jump the gun and make him a QB1. He is the quarterback equivalent of Jonas Gray two weeks back. Though if you somehow saw this coming, definitely kudos to you. The Manziel era may be starting in Cleveland — I don’t think they’ll go back to the lackluster Brian Hoyer, especially after Manziel played relatively well in his Week 13 stint. I am not a Manziel fanboy by any means, but he has much, much more upside than guys like Shaun Hill and Fitzpatrick should he get starts, especially considering the value he provides on the ground. The running backs at the bottom of the list are all key handcuffs, so they are basically insurance if you have extra roster space and own guys like DeMarco Murray, Eddie Lacy, etc.