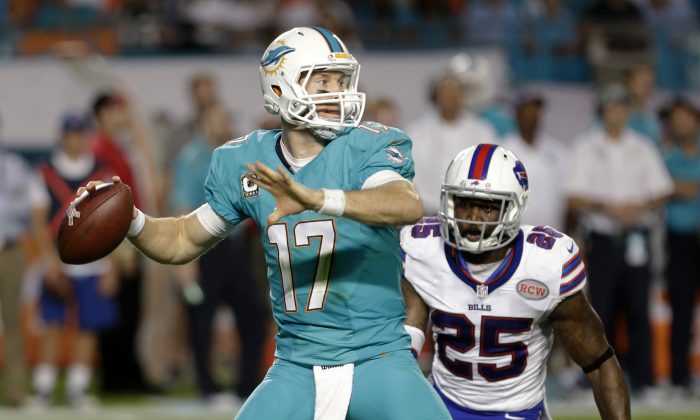 *This column ranks the most notable waiver wire pickups following Week 12 of the NFL season(Monday night game has yet to be played). These are general rankings based on player value and are not meant to be exact, especially between players of different positions. The players listed are all owned in less than half of ESPN 10-team standard leagues.

Ryan Tannehill is a name everybody who plays fantasy football seems to know about, so why is he still owned in less than 50 percent of leagues? Tannehill not only has 20 passing touchdowns through 11 games, but as his rushing touchdown in Week 12 showed, he can also pad his stats on the ground ala Andrew Luck – Tannehill has 276 rushing yards on the year. Tannehill is top 10 in scoring — above guys like Tony Romo, Cam Newton, and Matthew Stafford, so if you need QB help, run to see if he’s still available in your league. Mark Sanchez is another underowned QB. Sanchez has thrown over 300 yards in three starts, in which he has also totaled five touchdowns. Yes, Sanchez is not the greatest talent, and he will turn the ball over, but the extreme pace and volume of the Chip Kelly offense almost completely offsets that. Sanchez is a reasonable low-end QB1 play on Thanksgiving. Tre Mason is still owned in less than 60 percent mark of leagues, though it’s somewhat understandable. Mason is a featured back who will get volume, but with Shaun Hill at quarterback, the Rams offense as a whole is just not efficient. Mason is also a zero in the passing game, during which Benny Cunningham takes away a lot of snaps, including late in the game and in the red zone. Latavius Murray had a ‘facepalm injury’ in Week 12 after injuring himself following 112 yards and two touchdowns on four carries. With that said, the concussion he suffered was the first in his career. There will be some speculation as for now, but it looks like Murray won’t miss any time, and will finally get the snaps that he deserves over the ultra ineffective Darren McFadden and Maurice Jones-Drew. The downside is he plays with the Raiders, and his remaining schedule is one of the most difficult for running backs. Daniel Herron is on the RB2 map after getting the start and amassing 96 yards from scrimmage versus the Jags. As was the case with Ahmad Bradshaw, Trent Richardson was clearly inferior to his new backfield mate. It’s a disappointing fall from grace to say the least for the former #3 overall pick. Its worth noting that Herron has the potential to end up better than Murray and Mason; it’s just that we’ve only seen one week from him, and despite his lackluster play, Richardson continues to be in the mix. It looks like LeGarrette Blount is the new Jonas Gray after scoring 2 touchdowns in Week 12. However, we should know by now not to fall into the motions of the Pats backfield. Speaking of rookie wide receivers from LSU, there is in fact another one playing for the Dolphins named Jarvis Landry. With three touchdowns over his last two, Landry is a worth a flier as a WR3/WR4. As with Week 12, the Rams D is a fine stream in Week 13 versus Derek Carr and the Raiders. Giants D is awful, but an awful D is great versus the Jags, so consider them a option in Week 13.