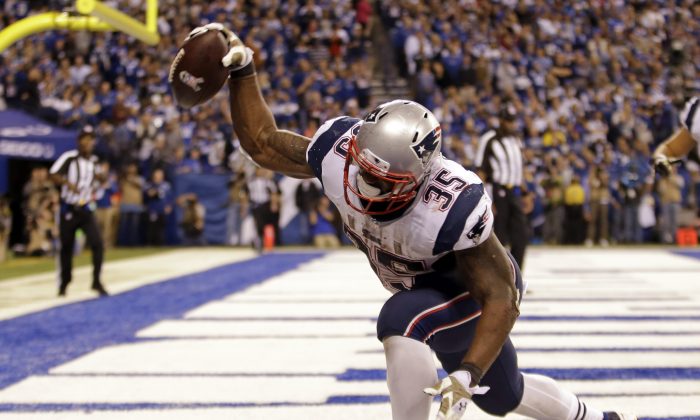 New England Patriots running back Jonas Gray celebrates a touchdown against the Indianapolis Colts during the second half of an NFL football game in Indianapolis, Sunday, Nov. 16, 2014. (AP Photo/AJ Mast)
NFL

*This column ranks the most notable waiver wire pickups following Week 11 of the NFL season(Monday night game has yet to be played). These are general rankings based on player value and are not meant to be exact, especially between players of different positions. The players listed are all owned in less than half of ESPN 10-team standard leagues.

The preseason expectations for Montee Ball were that he’d be a beast as the bellcow in the high-octane Peyton Manning offense. Needless to say, Ball was a huge disappointment, and backup Ronnie Hillman more or less became what Ball was supposed to be. Now, it looks like CJ Anderson is the new Ronnie Hillman, with backup Juwan Thompson possibly mixing in on some downs. As expected, reports coming out of Denver say that Hillman could miss extended time with his foot injury — up to six weeks. Meanwhile, Montee Ball pulled a Knowshon Moreno by “reinjuring” himself right after coming back from an extended absence due to injury(he aggravated his groin Sunday, and could possibly miss the season). Jonas Gray absolutely exploded Sunday night for 199 yards and four touchdowns. It’s easy to get caught up in the hype, but you have to remember Shane Vereen —  ranked ahead of Gray on the depth chart, got only one carry last night. The Patriots are just so capricious and unpredictable in their backfield management — its very tough to say whether Gray will get this kind of workload every week from here on out. With that said, the Patriots do seem to be playing Gray ala LeGarrette Blount and Stevan Ridley last year. At the very least, it looks like he’ll be getting goal line looks and a sizable amount of carries — the majority, and that is good enough reason to make him a must-add. The committee season is over in St Louis, with Tre Mason getting a whopping 29 carries for 113 yards in St Louis’s Week 11 upset victory over the Denver Broncos. Tre Mason is a locked-in RB2 down the stretch. Similar to the Broncos backfield, Terrence West was the new Ben Tate, and now Isaiah Crowell is the new Terrence West. Namely, Crowell is now the lead back in the run-heavy Browns backfield, though the other two backs are still getting touches. The rookie Crowell has actually been regarded as the most talented runner for a while now. Rather, it’s ball security issues that were holding him back. Crowell fumbled again Sunday, but the Browns didn’t seem to mind too much; at least, he wasn’t taken out of the game. The problem is, the guard can change in the Browns backfield at any moment, so Crowell is still more of a high-upside flex option. Garbage time helped pad some stats in Week 11, but Jordan Matthews is the real deal in the new Mark Sanchez aerial attack in Philadelphia. As a fellow preseason 2nd teamer, Matthews has now compiled 245 yards and three touchdowns in the two games since Sanchez took over. He is a WR2. For a year struggling with quality tight ends, Coby Fleener and Jacob Tamme could shine after injuries to starters Dwyane Allen and Julius Thomas. If Allen or Thomas are to miss any time — even one week, Fleener and Tamme are must adds, with Fleener being preferred. Fleener has been a target favorite of Andrew Luck since college at Stanford, and was coming into his own in the Colts offense anyway even before the Allen injury. After Julius Thomas left the game with a ankle sprain Sunday, Tamme was targeted 10 times, finishing with 4 catches for 31 yards. Colts D is self explanatory; any D facing the Jags O is a must-play. Meanwhile, with good play, the Cowboys D could stand to capitalize on some points after seeing Eli Manning throw an embarrassing 5 interceptions in Week 11.