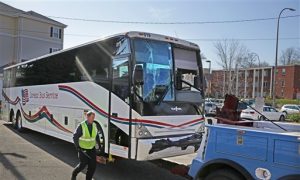 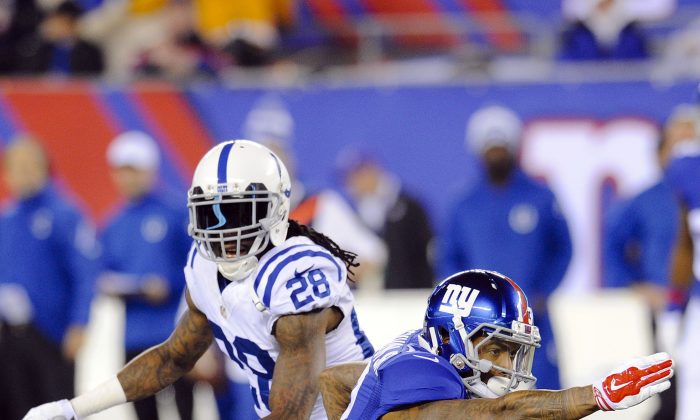 New York Giants' Odell Beckham, right, signals a first down after making a catch in front of Indianapolis Colts' Greg Toler (28) during the first half of an NFL football game Monday, Nov. 3, 2014, in East Rutherford, N.J. (AP Photo/Bill Kostroun)
NFL

*This column ranks the most notable waiver wire pickups following Week 10 of the NFL season(Monday night game has yet to be played). These are general rankings based on player value and are not meant to be exact, especially between players of different positions. The players listed are all owned in less than half of ESPN fantasy football leagues.

This week was a very light week on the waiver wire, so we have included players just over the 50% own-mark as well as many players from last week’s column. This is probably the final reminder for guys like Ryan Mathews, Odell Beckham, Mark Sanchez, and Tre Mason. Mathews is a featured back playing in an explosive offense, and is due back next week. Not sure why he’s only owned in 54% of leagues. Meanwhile, the No.13 overall pick Beckham has clearly developed into Eli Manning’s top option. On Sunday, he had seven grabs for 108 yards, even beating shutdown corner Richard Sherman on a double-move early. He really is a special talent, and is a rest of the way WR2. Perhaps by the end of this week, he will be owned in much more than 57% of leagues. Sanchez is playing tonight, so we finally get to see if the hype is real for him. Meanwhile, Tre Mason just played two straight weeks as the Rams’ featured back. Here’s to hoping that Jeff Fisher does not bring up his committee nonsense yet again during press festivities this week. Bishop Sankey finally ruled the Titans backfield in Week 10, fishing with 58 yards on 17 carries. That’s great, but I really don’t see much upside with Sankey. The 2nd round rookie out of Washington hasn’t actually impressed anyone with his play – Rotoworld pegged him as a “less-aggressive Knowshon Moreno”, and is a low upside flex option. CJ Anderson blew up Sunday for 90 yards rushing and 73 yards passing. But keep in mind, he’s sharing a backfield with Ronnie Hillman and Montee Ball. He’s not a long term option. Though intriguing, Charles Sims is in the same situation, with Doug Martin due back next week. Finally, if you need defensive streamers for next week, there are a multitude of options. Secondly, Ryan Mallett will be the new starting quarterback for the Texans next week, so there is some upside there, as QBs tend to be more error prone in first-starts. The Browns D has also been pretty solid as of late anyway, having scored 8+ for four straight weeks. The Bucs O is another offensively inept offense manned by Josh McCown. Though the Saints D normally would be pretty bad option, Andy Dalton has struggled mightily in recent weeks, especially last week, where he looked like a high school quarterback playing on a pro field(10/33 for 86 yards and 3 interceptions…).