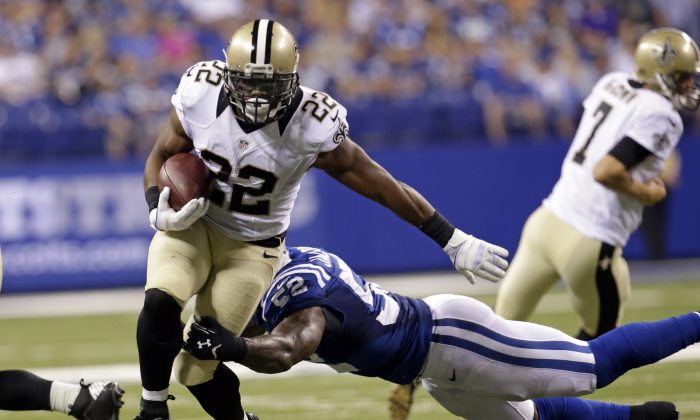 News broke earlier today that Mark Ingram will be sidelined at least a month due to a broken hand.

Therefore, run to pick up Khiry Robinson. Rotoworld compares Robinson with the likes of Chris Ivory, and with Ingram out, he now becomes the Saints’ clear-cut lead back.

The dynamic of the running back position in the NFL is such that most NFL offenses employ a running-back-by-committee. This makes the bellcows and three-down backs of the league (Adrian Peterson, Lesean Mccoy, Jamaal Charles) fantasy football’s most valuable players.

But actually, running back is one of the deepest and most level positions in the NFL. It’s not like the quarterback position, where the offense experiences a noticeable drop-off whenever the offense gets handed to the backup quarterback. Many backup running backs are not considered too worse-off at all from their respective starters, and are dynamites waiting to explode when given the chance.

Hence, when a running back goes down to injury, the next running back on the depth chart immediately becomes highly coveted in fantasy circles. This is because if the system was a committee, the remaining back now gets a full pie instead of a half-pie. And if the featured back went down, the backup will take up the featuring role.

This is not to say that Kirk Cousins doesn’t become a viable add after RG3 went down with a dislocated ankle. But in this column, we will focus on the running backs.

Injured in week 2, Charles has been diagnosed with a high-ankle sprain. Kansas City Chiefs Coach Andy Reid comments that it “doesn’t look to be a real severe one”, but high-ankle sprains typically can keep players out for multiple weeks.

Without Charles, the Chiefs haven’t missed a beat. Rather, then have actively looked to make Davis the new focal point of their offense, just as if he were Charles. Davis had two touchdowns in relief of Charles last week, and was targeted in the passing game a team-high nine times. If he is still available in your league, add him NOW.

Moreno will be out 4-8 weeks with a dislocated elbow.

The third-year back has 1064 career rushing yards at a clip of 4.3 yards a carry. Having competed with Moreno for the starting job during training camp, Miller now has a chance to prove himself as the clear-cut feature back.

Well, Peterson is not physically hurt, but his reputation is certainly ‘hurt’ legally, and he may miss more than a handful of games. The Vikings recently reinstated him, but that decision could be reversed quickly.

With, Peterson gone, Asiata is the Viking’s feature back. Unfortunately, Asiata truly is a big drop-off from Peterson. He really is more of a fullback playing the running back position. As a starter, Asiata is a RB3.

A sprained MCL will keep Matthews out for 4-5 weeks.

Brown, a former first round pick, will pick up most of Matthew’s work. Woodhead also gains some value as a passing-down back and becomes a quality flex option.