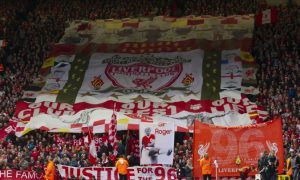 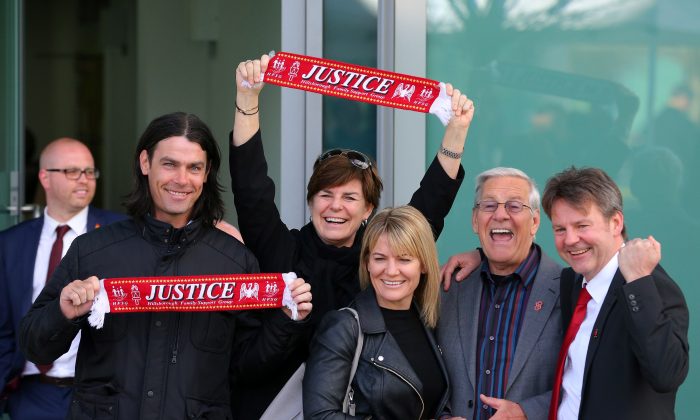 WARRINGTON, ENGLAND— Families depart Birchwood Park following the final verdict of the Hillsborough inquest on April 26th, 2016. The fresh inquests into the 1989 Hillsborough disaster, in which 96 football supporters were crushed to death, concluded with a verdict of unlawful killing, after the initial verdicts were quashed. (Dave Thompson/Getty Images)
Europe

The 96 Liverpool fans who died in the Hillsborough football stadium disaster were unlawfully killed, a jury found on Tuesday, April 26th, blaming police for the worst tragedy in the history of British sport.

Following the longest-running inquest in English legal history, jurors concluded that policing decisions at the ill-fated match in 1989 “caused or contributed” to the deaths, and amounted to “gross negligence”.

Relatives of the victims have fought a 27-year campaign to get to the heart of what happened during the disaster, and were angry at an initial inquest ruling the deaths were accidental.

They emerged from the courtroom hugging and in tears, holding pictures of their loved ones and a scarf reading “JUSTICE”.

They linked hands above their heads and sang the Liverpool Football Club anthem ‘You’ll Never Walk Alone’ and chanted “Justice for the 96”.

Prime Minister David Cameron paid tribute to their “extraordinary courage” in their “long search for the truth”.

“Landmark day as the Hillsborough inquest provides long overdue justice for the 96 Liverpool fans who died in the tragic disaster,” he said on Twitter.

The disaster occurred on April 15th, 1989 during an FA Cup semi-final between Liverpool and Nottingham Forest at Sheffield Wednesday’s Hillsborough stadium in northern England.

Seeking to alleviate a crush that had developed outside the ground at the Leppings Lane End shortly before kick-off, David Duckenfield, the police match day commander, ordered the opening of an exit gate.

It enabled 2,000 fans to pile into the already over-full terracing pens behind the goal at that end, causing a fatal crush.

The mammoth inquest, which began in March 2014, took place in a purpose-built courtroom in Warrington, 15 miles outside Liverpool.

Coroner John Goldring, who presided over the inquests, asked the nine-member jury to decide on 14 key points – with the issue of whether the victims were unlawfully killed the central question that caused them the most difficulty.

The jury members had to be convinced that Duckenfield had breached his duty of care to those who died.

They needed to be satisfied that his breach of duty caused the deaths and that it amounted to “gross negligence”.

They concluded it was unlawful killing by a seven-two majority.

The jury also concluded that the behaviour of Liverpool supporters on the day did not cause or contribute to the disaster.

The tragedy occurred when English football hooliganism was at its height and many in authority were prepared to believe the worst of fans.

Under English law, an inquest exists solely to determine how the deceased came by their death. It does not impose criminal sentences.

However, an inquest verdict can act as a springboard for other court proceedings.

Sue Hemming, head of the CPS’s special crime and counter terrorism division, said it would now “formally consider whether any criminal charges should be brought against any individual or corporate body based upon all the available evidence”.

A report into the disaster by leading judge Lord Justice Peter Taylor recommended the removal of terrace fences and the introduction of all-seater stadiums, which have transformed the experience of going to a top-flight football match in England.

But in 1990, British prosecutors deemed there was insufficient evidence to bring criminal charges against the police or any other individual, group or body.

A year later the original coroner’s inquest returned verdicts of accidental death for all the victims.

But many of the families of the deceased felt this was a whitewash and continued to campaign for fresh inquiries under the banner “Justice for the 96”.

In April 2009, the Hillsborough Independent Panel was set up following the 20th anniversary of the tragedy.

The panel’s 2012 report found that police orchestrated a cover-up, manipulated documents, and blamed innocent supporters for the disaster.

That in turn led to the establishment of fresh inquests.

The final memorial at Liverpool’s Anfield stadium for the 96 victims was held this month.

Families of the deceased unanimously agreed this year’s service would be the last public event at Anfield in memory of their loved ones.

One of the bitter consequences of the more than two decades it took to reach Tuesday’s announcement was that a number of those who campaigned for the new inquests did not live long enough to witness their conclusions.