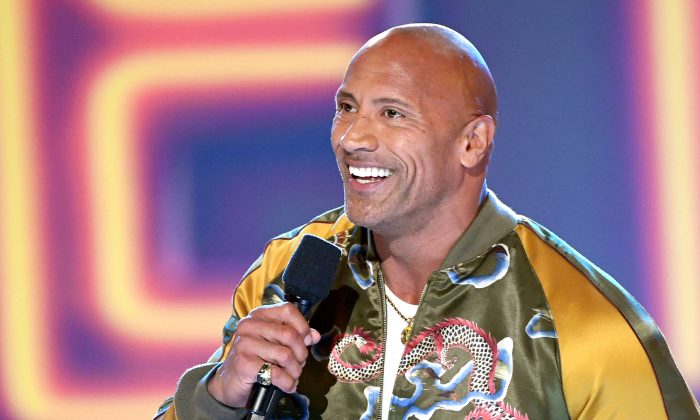 Conservative fans of Dwayne “The Rock” Johnson are disappointed after he backtracked on a playful reference to the newly-appointed conservative British Prime Minister, with fans saying that the wrestling and movie star had caved to pressure from a left-wing Twitter mob.

In a typically exuberant interview, The Rock had been playfully riffing on the fact that he shares a surname with the incoming British Prime Minister, Boris Johnson, known for his iconic mop of blonde hair.

“He’s family, by the way; you don’t know that, but now all of Britain knows … he’s my cousin,” The Rock said in an interview with British media. “It’s like looking in the mirror, every time I see Boris.”

He later reheated the gag for Twitter, writing in a now-deleted post on July 29, “Breaking: PM Boris Johnson is in fact my cousin (though we clearly look more like twins).”

Wait, did we hear that correctly?

The “Fast and Furious” star then made a more serious point.

“Jokes aside, PM did say something in his speech I liked—‘the people are our bosses’. 100% agree. The people/audience/consumer will always matter most. #ourboss.”

The speech he was referring to was Boris Johnson’s first speech as prime minister, made on July 24.

But Johnson the movie star hadn’t counted on just how much Johnson the prime minister has become a figure of hate for those opposed to Brexit and conservativism in the United Kingdom.

Fifteen minutes later, after a furious backlash from Johnson’s detractors, the Tweet had been deleted.

“Well according to the people, maybe we’re not related after all,” he wrote, adding a laughing face emoji.

Well according to the people, maybe we’re not related after all 😂🤦🏽‍♂️
Big mahalo to my people who I can always rely on to give me the real talk and swift perspective & education on the individual I did not know 😉Tequila on me, Britain 🙌🏾🥃 https://t.co/xbyjVRBhrB

“Big mahalo to my people who I can always rely on to give me the real talk and swift perspective & education on the individual I did not know. Tequila on me, Britain.”

Naturally enough, the move brought praise from those who are not fans of the prime minister.

“You’re definitely not related,” wrote one on Twitter. “Admitting honest mistakes is definitely a million miles away from what the PM would of [sic] done in this scenario.”

Many other fans expressed disappointment in The Rock, but few seemed willing to give up on the “Jumanji” star, who has made a name for himself on social media–where he has over 13 million followers, for his easy-going sense of fun.

“Dude, don’t cave to the Twitter mobs,” wrote one person. “Especially when they’re decisively political one way or the other. Form your own opinions, that’s why so many respect you. I’m disappointed in you.”

I doubt you’ve been ‘educated’ on the PM, rather you’ve been given a negative perspective from the left. Find out for yourself before assuming everything you are told is correct. More people are positive about Boris than negative so try to explore all sides of the debate.

“Oh Dwayne, I thought you were tough,” wrote another Brit, “but you gave in to a bunch of snowflakes. Your original thoughts were spot on, don’t let their hate make you change anything. Pint of Old Peculiar on me, if you ever pop by.”

Give Dwayne a little slack, he has to work in Hollywood. This is not important enough for him to risk getting branded a conservative and lose his career. Everyone has to pretend to be liberals others are not tolerated. Pedophiles are, serial rapists are.. not conservatives.

Another tough guy taken down by the keyboard gangsters

Some conservatives took a harsher line.

“Now all we need to do is work on that new nickname,” wrote James Dellingpole. “‘The Sponge’ has a nice, squishy feel about it. I also like my friend Toby Young’s ‘The Invertebrate.’”

The Rock has given no further response on the issue.