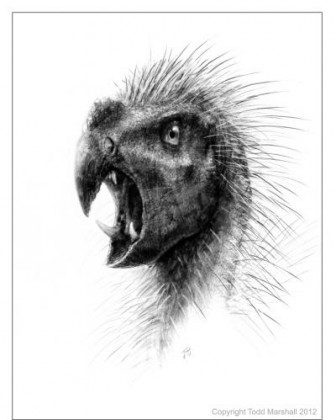 The new dinosaur dwarf Pegomastax from South Africa. With jaws only 1-inch in length, plant-eating Pegomastax ("thick jaw") is one of the smallest dinosaurs ever discovered. (Drawing by Todd Marshall)
Science

One of the smallest dinosaurs ever discovered—a fossilized heterodontosaur from southern Africa—has been named Pegomastax africanus, meaning “thick jaw from Africa.”

Heterodontosaurs were small, herbivorous dinosaurs characterized by their different teeth, including prominent canines.

This diminutive dinosaur lived about 200 million years ago during the Early Jurassic, and measured less than 2-feet-long. It was bipedal and had a parrot-shaped beak that it probably used to pluck fruit.

At the front of the reptile’s 1-inch-long jaws were two vampire-like fangs. Its rear teeth were suited for cutting up vegetation with a self-sharpening action as they slid past each another when the jaws closed.

“Very rare that a plant-eater like Pegomastax would sport sharp-edged, enlarged canines,” said Paul Sereno, a paleontologist at the University of Chicago and author of a new study about the species, in a press release.

Some scientists believe that heterodontosaurs ate meat, or at least insects, but microscopic examination of their canines shows they were probably used for self-defense and fighting for mates.

Wear facets and chipped enamel on the fangs suggest they may have been used for digging or for nipping flesh rather like the downward-pointing canines or tusks of Muntjacs, otherwise known as barking deer.

Pegomastax weighed less than a cat and was probably covered in long quill-like bristles with an appearance similar to a “nimble two-legged porcupine,” according to Sereno.

The findings were published online in ZooKeys on Oct. 3.