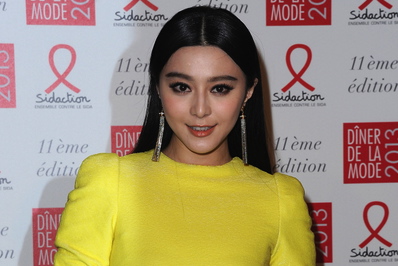 Fan Bingbing poses as she arrives to attend the Sidaction Gala Dinner 2013 at Pavillon d'Armenonville on Jan. 24, 2013 in Paris, France. She is considered by many Chinese to be the prettiest actress with facial features that approach perfection, and she has become a model for many Chinese women choosing plastic surgery. (Pascal Le Segretain/Getty Images)
China

Chinese actress and fashion icon Fan Bingbing is considered by many Chinese to have almost perfect facial features. According to mainland Chinese media, many young women are submitting to the surgeons knife to emulate her looks. This is creating some difficulties at customs, as their new look is often completely different from their passport photos.

On the morning of Sept 2, two attractive women were held for investigation by customs police at the Gongbei port of entry in Zhuhai City, according to Chinese media. The new look “Fan Bingbing” girls did not resemble their passport photos.

Besides these two “Fan Bingbings,” quite a few other female tourists on that day resembled Fan Bingbing.

A manager working at customs said that with more and more people having plastic surgery brought difficulties and challenges for inspectors.

One of the “Fan Bingbing” lookalikes had plastic surgery earlier in the year in South Korea. Her surgery included rhinoplasty, double-fold eyelids, jaw thinning surgery, plastic chin surgery, and surgery to change the shape of her eyes, five operations in all.

To prove her identity she showed police photos of herself before the plastic surgery that she had stored in her cell phone. She also had photos of the two pieces of bloodied bones, about 1.2 inches in length that were removed to give her face a thinner look.

The Korean plastic surgeon suggested to take the photos of her cut bones in case she encountered difficulties passing through customs.

A customs officer revealed that another girl who was questioned because of differences between her looks and passport photo became very panicky, begging police to speak softly.

She was afraid that her boyfriend waiting not far away would hear, confessing she had the surgery before meeting him. “If he knew I had plastic surgery, I would be in deep trouble.”

Translated by Jenny Yang. Written in English by Christine Ford.