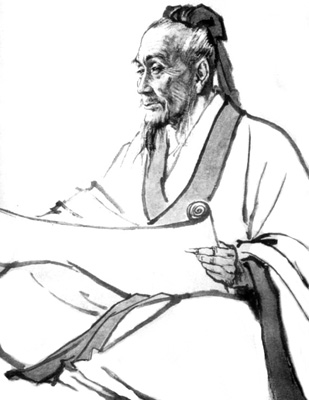 Zhang Zhongjing (A.D. 150-219), known as the sage of medicine, was a famous medical expert during the late Eastern Han Dynasty (A.D. 25-220). Even in his early years, Zhang was already established and very well-known as a talented doctor, yet he was still keen to find out new things, visiting famous doctors everywhere to learn from them.

One time, Zhang’s younger brother was about to leave home on a business trip. Before he left, he asked Zhang Zhongjing, “Brother, I’m going to take a long trip. Could you take a look to see if I’m going to have any serious diseases in the years to come?”

Zhang examined his pulse for a while and then said, “Next year I’m afraid you might develop an ulcer on your back!”

His brother was surprised: “I often hear you say that among the most difficult conditions to cure are ulcers with a name and ailments with no name. How can a skin ulcer on the back be cured?”

Zhang replied, “Don’t worry! I will write a prescription for you. When the time comes, take the medicine and the ulcer will move to the flesh on your bottom. Later, if anybody recognizes it as originally being the skin ulcer that was on your back, then ask that person to treat you. If that person can cure it, be sure to write me a letter.”

More than a year passed and one day Zhang’s brother suddenly felt pain on his back when doing business in Xiangyang, a city in the northwest of Hubei Province. He then took the medicine according to his brother’s prescription.

A few days later, the skin ulcer indeed broke out on his bottom. He visited many doctors in Xiangyang; some said it was a boil, others said it was a pressure sore, but nobody could diagnose it. Then, later, a famous doctor known as “Immortal Wang” in Tongji Herb Store and Clinic took a look at it, smiled and said, “It was a skin ulcer on your back. Who moved it to your bottom?”

“It was my brother,” Zhang’s brother replied.

Immortal Wang said, “Since he moved it, he must be able to cure it.”

“But he is far away in Nanyang. Doctor, please help me!” the brother said.

So Immortal Wang wrote him a prescription. Zhang’s brother took the medicine and put on a few herbal plasters. Soon the skin ulcer was gone. Then he wrote to his brother about it. Zhang was very pleased when he received the letter. He packed up immediately, took some money for the trip, and left for Xiangyang on foot.

One morning, at the door of Tongji Herb Store and Clinic in Xiangyang, a young man carrying bags and an umbrella said to the manager, “I’m from Henan. I have no way to make a living; please take me in as your apprentice!”

Immortal Wang heard this and came out. He saw the young man was sharp-witted and clean, and said, “Okay! I need an extra pair of hands, so you will be my medicine-making apprentice.” The young man was of course Zhang Zhongjing.

Zhang was very intelligent and eager to learn. He was familiar with various herbs and was very skilled at making them into ready-to-use medicines. Soon, Immortal Wang promoted him to a pharmacist at the clinic. He was in charge of medicines and also saw patients with common ailments. Everybody praised him as doctor number two in the pharmacy.

Wang noticed that Zhang really had some capabilities, so he let him be his assistant. When Wang felt a patient’s pulse to examine illnesses, Zhang wrote down the prescription. When Wang encountered complicated symptoms, he would first feel the pulse and then let Zhang do the same in order for him to learn where the illnesses were and how to cure them. Zhang retained these medical principles deep in his heart and wrote them down in his notebook. A year passed in no time at all.

One day, an old man riding a donkey rushed into the clinic. He said his son had an emergency condition and asked Wang to go back with him. About an hour later, the old man came back to the herb store with a prescription for some herbs. Zhang then knew the patient had a bug in his body because the prescription asked for the herb Garcinia morella, a poisonous drug used to kill bugs. He saw that Wang had only prescribed 16 grams. Zhang hesitated but then just grabbed the medicine according to the prescription. After a while, Wang came back and prepared to take a rest. Zhang immediately stopped him and said, “Doctor! The patient’s father will come back soon to take you back again.”

Wang was very surprised and said, “The patient was cured, why would his father come back here?”

Zhang said, “Please bear with me for giving my honest opinion. Garcinia morella can kill bugs in the human body, but the quantity has to be 32 grams. You only gave 16 grams, which can only repress the bug and weaken it. Then it will come back to life, and attack the patient even more fiercely. At that time, even that medicine won’t work anymore. I am afraid the patient is in a life-threatening danger!”

While Wang was feeling uncertain about whether to trust Zhang, the old man ran over to them shouting, “Mr. Wang! My son is in so much pain he is almost dying. Please go and take a look!”

Wang started to panic and didn’t even know what to do. Zhang then said, “Please allow me to go there for you as your apprentice!” So he got on the donkey and went right to the patient’s home.

Upon arrival, Zhang saw the patient was in so much pain that he was rolling around on the ground. Zhang took out his needle and asked the patient to take off his clothes. He identified the appropriate acupuncture point and stuck the needle right into the bug’s head.

The bug fought with all its might when its head was pierced. The patient cried out loudly and lost consciousness. His father was really shocked. Yet Zhang smiled and said, “Don’t worry, the bug is dead.” As soon as he said these words, the patient woke up.

Zhang then wrote a prescription for a laxative. After the patient took the prescribed medicine, a huge bug came, and the patient recovered fully.

Immortal Wang was very surprised and happy when he learned this. He asked Zhang, “Our Doctor Number two, who are you really?” Zhang replied, “My name is Zhang Zhongjing. I came here to learn from you!”

Wang responded: “My goodness! I’m not worthy of being your teacher!” He treated Zhang to a good banquet.

Later they became good friends. Even after Zhang returned to Nanyang, the two remained in touch for the rest of their lives.