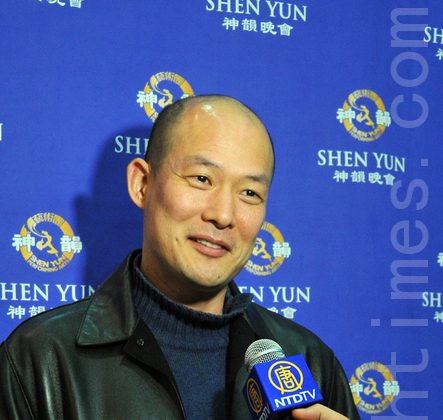 ANYANG, South Korea—Famous Korean actor Yoon Donghwan praised Shen Yun, saying “The dancers’ excellent performances are the pinnacle of the performing arts, which has inspired me, as an actor, to work harder.”

Yoon Donghwan’s most recent work is the movie Arrow, the Ultimate Weapon, and his popular work can be seen in the TV series Can You Hear My Heart, Slave Hunter, and East of Eden.

On the evening of March 3, after watching the second show of Shen Yun Performing Arts New York Company at the Anyang Arts Center, Mr. Yoon said, “From my personal point of view, I think the rendering of the snowflakes in the dance Snowflakes Welcoming Spring is very innovative. It is my favorite part of the show.”

Yoon Donghwan noted, “Chinese traditional dance can inspire people to be concerned about traditional Chinese culture. It is very rare to see this kind of performance on the modern stage. I want to tell everybody that Shen Yun is wonderful and worth seeing, as its dances are very creative and exquisite.”

The 77th generation descendant of Confucius and board director of a Korean educational association, Mr. Gong Hwan Yong attended Shen Yun Performing Arts New York Company’s second show in Anyang Art Centre, on the evening of March 3. After attending the show, he praised the backdrops, saying, “I’m so amazed. It was very gorgeous.”

He also pointed out that the show exquisitely portrayed the traditional Chinese culture from ancient to modern times. As many Koreans do not quite understand Chinese culture, he said that the more this kind of show was performed, the better.

Talking about the program In the Mountains, of Taiwanese Amei Dance, he articulated in Chinese, “Great! Wonderful.”

Amazed by the dynamic backdrops, Mr. Gong said, “I was very much surprised. What impressed me most was the backdrops, because what we see in local shows are usually very plain, but Shen Yun’s backdrops are really spectacular. I was really amazed. They are indeed very gorgeous. “

He excitedly mentioned how he was moved by the programs because of the performers’ various facial expressions. When talking about the scene How the Monkey King Came to Be, in which the Monkey King descends from the backdrops to the stage and then immediately transforms into a human, he said, “I have never seen such a scene. It was indeed amazing and remarkable.”

Mr. Gong said that he was enthralled with the dance Lotus Leaves performed by female dancers. “It was exceptionally good. In Korean dances, usually we only see fans, without lotus flowers. The performance of this group dance was really remarkable,” he said.

Mr. Gong said that he was a former principal of the Gyeonggibuk Science High School, and the educational association he joined was composed of retired principals. He added that if students were able to see such a wonderful show, it would be great as children are supposed to see more things with great compassion and true beauty.

Hearing that Shen Yun would come back to perform in South Korea next year, he said, “All of the dances were marvelous. I will definitely invite others to see the show then.”