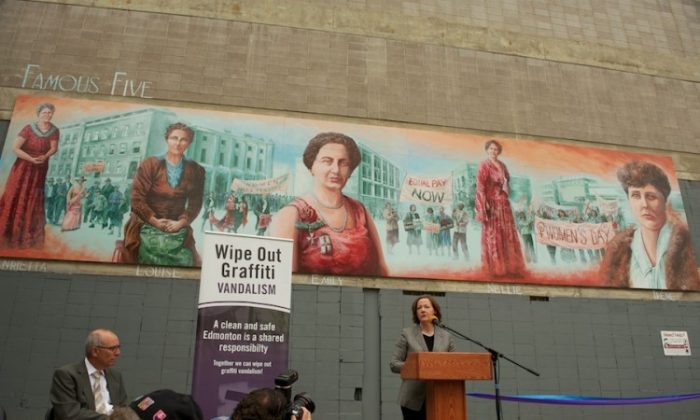 Alberta Premier Alison Redford speaks at the unveiling of the Famous Five mural in Edmonton. The mural is part of a campaign to clean and beautify the city and deter graffiti vandalism. (Courtesy City of Edmonton)
Canada

In the early 1900s they fought for women’s rights. Now they’re helping to deter graffiti vandalism in Edmonton.

Widely known for winning the right for women to be declared as “persons” eligible to sit in the Senate, the Famous Five were a group of trail-blazers from Alberta who helped improve economic, social, and political equality for Canadian women.

The mural is the eighth piece in the Giants of Edmonton series, which depicts those who have contributed to the local community.

“These women changed the course of history in Canada, so in our view, coming from Edmonton and being from here, it was really important that we recognize them as giants in our community,” says Sharon Chapman, graffiti project manager with Capital City Clean-up.

Started in 2008, the Capital City Clean-up program has been a resounding success, with graffiti rates down 43 percent since 2010, according to figures from the city.

The innovative program was created to address concerns from communities that the amount of graffiti in Edmonton was “getting out of hand,” Chapman explains.

“Making murals here and in other cities has been shown to deter graffiti vandalism,” she says. “Graffiti taggers have a tendency to stay away from other forms of art. It’s not a guarantee, but it does help us beautify the city and at the same time deter the vandalism.”

Chapman says the program’s success has spawned another local community mural program, where non-profit community groups can apply for up to $2,000 funding to put up murals in their neighbourhoods. This has led to the creation of an additional 20 murals around Edmonton.

Chapman says the murals benefit the community by inspiring the public with depictions of local role models.

“They recognize the contributions that various Edmontonians have made. By honouring [the giants] we show not only that we can deter graffiti vandalism and beautify the city, but it can serve as an inspiration to become involved in Edmonton.”