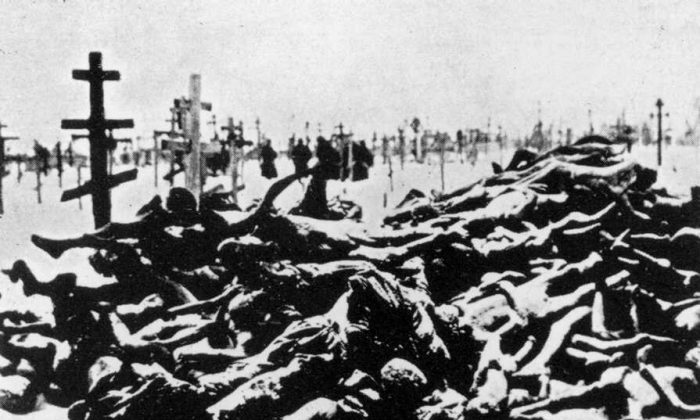 Warning: Photos in this article are graphic and might be disturbing for some readers.

March 2017 marks the 100th anniversary of the start of the Russian Revolution, which led to the eventual rise of communist rule in Russia. But just a few years after the Bolshevik Revolution, an ignoble footnote in history emerged.

A few years after the Soviet Union became the world’s first communist state in the 1920s, a little-known but devastating famine ravaged the Russian countryside. The Povolzhye famine started in 1921 and ran until 1922, leaving millions dead and even more affected.

The famine was so bad that peasants were driven to practice the unthinkable: cannibalism. The Red Cross quoted a 1921 Soviet police report as saying, “Right now [the peasants] are digging up bodies in order to eat them.”

Photos captured during the distressing time show starving Russian farmers and workers—clad in thick coats—standing over children’s body parts. Apparently, the body parts were sold on the black market.

At least 5 million people died during the Povolzhye famine, which was triggered by policies initiated by Russian dictator Vladimir Lenin, who had been in charge of the Soviet Union since 1917. At the time, he instructed guards to take food from the poor. His Bolsheviks believed peasants were trying to undermine the war effort by taking their food away from the army.

This famine, however, should not be confused with the Soviet “Great Famine,” known as the Holodomor in Ukraine, which lasted between 1932 and 1933, left many millions more dead under Joseph Stalin. But as Lenin himself said, “Let the peasants starve.”

Thousands of villages were abandoned by their wretched inhabitants, who went scavenging for food wherever they could hope to find it. They survived on grass, clumps of earth, domestic animals… and even human flesh. In June 1921 Lenin acknowledged the looming tragedy, and the writer [Maxim] Gorki appealed to the world for help. The leadership of the Soviet Red Cross sent a message to Geneva underlining the urgency of the situation.

According to aid workers who arrived from the United States and Europe in 1921, “Ghastly rumours about sausages prepared with human corpses, though officially contradicted, were common. In the market, among rough huckstresses swearing at each other, one heard threats to make sausages of a person.”

Another said, “Families were killing and devouring fathers, grandfathers and children.”

The Red Cross account added that then-ICRC’s President Gustave Ador and Norwegian diplomat Fridtjof Nansen called on the League of Nations for financial support, and during a meeting on Oct. 6, 1921, there was a hesitation to act.

Nansen then traveled to the famine-ravaged Volga region to get an idea of what was happening on the ground. Upon his return, he stated that “19 million people were condemned to die.”

He backed his words up with photographs, showing the devastation, according to the Red Cross.

Lenin died in 1924, shortly after the famine, and Stalin took over as head of the communist party.

Photos taken in Ukraine during the Holodomor famine in the early 1930s also show widespread misery.

Yale University historian Timothy Snyder, who has carried out extensive research in Ukraine, estimates that 3.3 million people died during Holodomor, but others have said the number is much higher.

A woman who lived in a village devastated by Stalin’s policies described the situation.

“There was a deathly silence,” Nina Karpenko told the BBC of the Holomodor. “Because people weren’t even conscious. They didn’t want to speak or to look at anything.”

“They thought today that person died, and tomorrow it will be me. Everyone just thought of death.”

“The brigades crawled everywhere and took everything. People had nothing left to do but die,” Karpenko added.