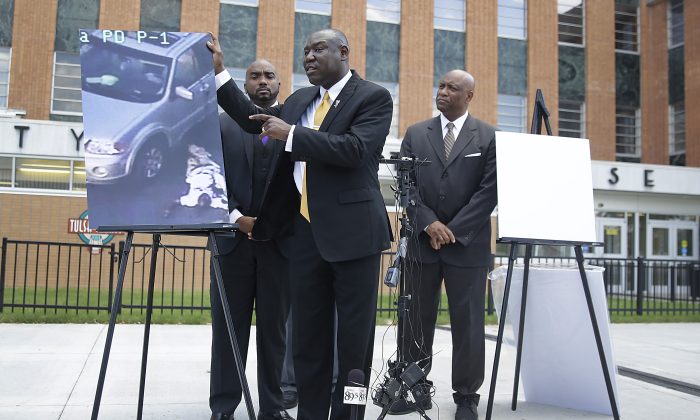 Attorney Benjamin Crump, center, one of the attorneys for Crutcher's family, speaks about Terence Crutcher during a news conference about the shooting death of Crutcher Tuesday, Sept. 20, 2016 in Tulsa, Okla. Crutcher, was shot by a Tulsa Police officer on Friday night. Also pictured are attorneys David Riggs, left, Damario Solomon-Simmons and Melvin C. Hall. (Mike Simons/Tulsa World via AP)
US

Family: Tulsa Shooting Victim Was Turning His Life Around

TULSA, Okla.—The unarmed black man shot dead in the middle of a Tulsa street last week by a white police officer had run-ins with the law dating back to his teenage years and had recently served a four-year stint in prison.

But those closest to the 40-year-old victim, Terence Crutcher, described him as a church-going father who was beginning to turn his life around. After marking his 40th birthday with his twin sister last month, Crutcher sent her a text that read, “I’m gonna show you, I’m gonna make you all proud.”

Crutcher was due to start a music appreciation class at a local community college on Friday, the day he was fatally shot by Tulsa police officer Betty Shelby after she responded to a report of a stalled vehicle.

The shooting was captured in graphic detail by a police helicopter and a cruiser dashcam, though it’s not clear from that footage what led Shelby to draw her gun or what orders officers gave Crutcher. An attorney representing Crutcher’s family says Crutcher committed no crime and gave officers no reason to shoot him.

Shelby was put on paid administrative leave while local and federal officials investigate the shooting.

Crutcher’s criminal history includes a 1995 arrest in nearby Osage County in which officers reported they saw him fire his weapon out a vehicle window. Records obtained by The Associated Press on Tuesday show that when Crutcher was ordered to exit the vehicle for a pat-down search, he began making a movement to his right ankle before an officer managed to get control of Crutcher. A .25-caliber pistol was found in his right sock, the arresting officer wrote in an affidavit.

Crutcher eventually entered a no-contest plea to charges of carrying a weapon and resisting an officer and received suspended sentences, court records show.

Crutcher’s family could not be reached for comment on his criminal record. But an attorney for his family, Melvin Hall, said those details were not known by police at the scene.

“Nobody claimed that he was a perfect individual. Who is perfect? But that night he was not a criminal,” Hall said. “He did not have any warrants. He had not done anything wrong. He had a malfunctioning vehicle, and he should have been treated accordingly.”

Terence Crutcher was scheduled to begin the music class at Tulsa Community College on the day he was shot, and TCC President Leigh Goodson said in a statement that Crutcher had talked with staff about his desire to be successful in college.

“He brought to TCC his talents, hopes and dreams of creating a successful life by dedicating himself to completing a degree,” Goodson said.

Crutcher’s sister, Tiffany Crutcher, described his text message at a press conference on Monday, where she also called for charges against Shelby.

On Friday, two 911 calls describing an SUV that had been abandoned in the middle of the road preceded the fatal encounter between Crutcher and the police. One unidentified caller said the driver of the stalled vehicle was acting strangely, adding, “I think he’s smoking something.”

Tulsa Police Sgt. Dave Walker told the Tulsa World on Tuesday that investigators recovered one vial of PCP in Crutcher’s SUV, but he declined to say where in the vehicle it was found or whether officers determined if Crutcher used it Friday evening.

An autopsy and toxicology results are pending, and police said the toxicology report could take several weeks.

Attorneys for Crutcher’s family said the man’s relatives did not know whether drugs were found in his vehicle and, even if they were, that wouldn’t justify his fatal shooting.

PCP or phencyclidine, also called angel dust, can cause slurred speech, loss of coordination and a sense of strength or invulnerability, according to the U.S. Drug Enforcement Administration and the National Institute on Drug Abuse. At high doses, it can cause hallucinations and paranoia.

Video Shows Tulsa Man Had Hands up Before Police Shooting

Police video shows Crutcher walking toward his SUV, which is stopped in the middle of the road. His hands are up and a female officer is following him. As Crutcher approaches the driver’s side of the SUV, more officers arrive and Crutcher appears to lower his hands and place them on the vehicle before the officers surround him.

Crutcher can be seen dropping to the ground. Someone on the police radio says, “I think he may have just been tasered.” Then almost immediately, someone can be heard yelling, “Shots fired!” and Crutcher is left lying in the street.

Police Chief Chuck Jordan said Monday that Crutcher had no weapon on him or in his SUV when he was shot.

Shelby’s attorney, Scott Wood, said Crutcher was not following the officers’ commands and that Shelby was concerned because he kept reaching for his pocket as if he was carrying a weapon.

“He has his hands up and is facing the car and looks at Shelby, and his left hand goes through the car window, and that’s when she fired her shot,” Wood told the Tulsa World.

But attorneys for Crutcher’s family challenged that claim Tuesday, presenting an enlarged photo from the police footage that appeared to show that Crutcher’s window was rolled up.

Local and federal investigations are underway to determine whether Crutcher’s civil rights were violated and whether Shelby should face charges. Hundreds of protesters rallied Tuesday night outside police headquarters in downtown Tulsa calling for her firing.

Betty Shelby’s mother-in-law, Lois Shelby, said the officer is grieving for Crutcher’s family and isn’t prejudiced. She told the AP in a phone interview Tuesday that Shelby “thought she had to protect her own life” when she shot Crutcher.

“She wouldn’t harm anyone. We’re all sick. We feel for the (Crutcher) family,” Lois Shelby said. “But, you know, we have a family that goes out every day and faces life and death. And when she is being accused of things she didn’t do wrong, it’s too much, and they don’t think about our family.”

The shooting comes four months after ex-Tulsa County volunteer deputy Robert Bates was sentenced to four years in prison on a second-degree manslaughter conviction in an unarmed black man’s 2015 death. Bates said he mistakenly grabbed his gun instead of his Taser. Shelby worked as a Tulsa County sheriff’s deputy for four years before joining the Tulsa Police Department in December 2011, officials said.