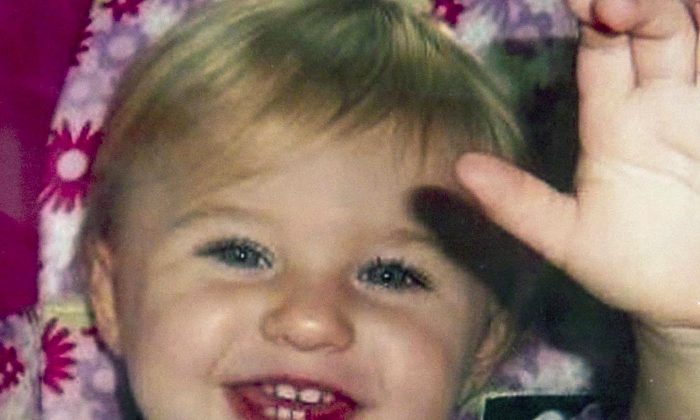 PORTLAND, Maine—The mother of a Maine toddler who disappeared five years ago while staying with her father plans to take steps to obtain a legal declaration that the child is dead.

The declaration would be the first step to asserting future legal claims and holding accountable those responsible for Ayla Reynolds’s death, the mother’s family said in a statement ahead of the fifth anniversary of the child’s disappearance.

Her mother, Trista Reynolds, plans to retain a lawyer and to begin the process soon, likely in January, a family spokesman said Wednesday.

“Sadly, Ayla Reynolds will not be building snow forts with her little brothers this holiday season. She won’t write a list for Santa. Instead, Ayla will become the subject of a probate court filing,” the family said in a statement to the media.

Twenty-month-old Ayla was staying with her father, Justin DiPietro, in Waterville when she was reported missing on the morning of Dec. 17, 2011. DiPietro told authorities that he tucked Ayla into bed the night before and she was gone the next morning. He said he believes she was abducted.

A 911 call prompted a search by police that expanded to include game wardens, FBI agents and other officers who canvassed neighborhoods, lowered streams and sent divers into the nearby Kennebec River. The missing person case eventually became the largest criminal investigation in Maine history.

Investigators who found Ayla’s blood inside the home concluded that the child was no longer alive and was a victim of foul play. Detectives maintain adults in the home know more than they’ve told investigators, but the case remains unsolved and no charges have been filed.

It wasn’t clear if DiPietro still lives at the Waterville home, and he couldn’t be reached for comment Wednesday. His mother, who owns the home, didn’t immediately return a message left on her cellphone.

Trista Reynolds and her family also believe the adults in the home—DiPietro, his girlfriend, and his sister—know what happened to Ayla. The family said Trista is trying to make the best of the holiday season for the sake of her sons in the light of the annual reminder of the loss of her daughter.

“In spite of this unbearable milestone, she must do her utmost to provide an atmosphere of Christmas cheer for her young sons so that they may know the joy of Christmas rather than associate this wondrous holiday with the deep sorrow that has forever tainted the season for Trista and her family members,” the statement said.