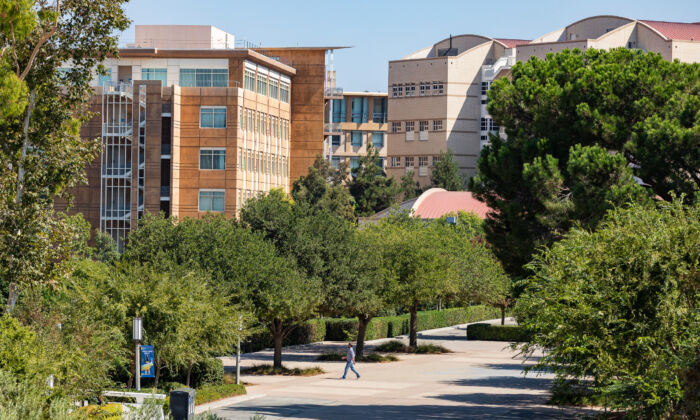 A student crosses a walkway on the University of California–Irvine campus in Irvine, Calif., on Sept. 25, 2020. (John Fredricks/The Epoch Times)
Orange County Community

Susan and Henry Samueli, longtime donors and supporters of the University of California, Irvine, have pledged $4 million in matching funds to UCI’s Center for Jewish Studies, an action that UCI said will position the university as a leader in the field.

That means for each dollar donated to the center, the Samuelis will match it, up to $4 million.

The center, launched in 2017 and administered by UCI’s School of Humanities, is led by historian Matthias Lehmann, who holds the role of Teller Family Chair in Jewish History at the school.

This was the center’s first endowed chair after funding was provided in 1991 and established Jewish studies as a permanent part of UCI’s curriculum. The school has since taken an active role in the study of anti-Semitism.

“Expanding Jewish studies on campus falls under a campuswide priority of ‘growth that makes a difference,’ facilitating interdisciplinary, problem-based scholarship and teaching,” said Chancellor Howard Gillman in an Aug. 1 statement. “Susan and Henry Samueli’s deep generosity will catalyze community support for Jewish studies at UCI and help UCI become a model for tolerance and appreciation of cultural and religious pluralism.”

Lehmann added: “Community support has been a vital component of establishing a permanent footing for Jewish studies at UCI. Now, with the support of the Samuelis’ matching gift, we can expand our impact.”

UCI said gifts to the center will help accomplish several goals. Among them: increasing programming to support K-12 educators teaching about the Holocaust, funding two more endowed chairs for the study of contemporary anti-Semitism as well as Israeli studies, and partnering with recognized universities in Israel to bring scholars to UCI’s campus.

UCI noted that Lehmann’s annual undergraduate lecture on the Holocaust always fills to capacity. Additional faculty in the department includes Dr. Jeffrey Kopstein, a professor of political science, who recently completed a term as a distinguished fellow at the U.S. Holocaust Memorial Museum in Washington, D.C.

Lehmann also piloted a program called Confronting Antisemitism through the university’s Office of Inclusive Excellence. As part of that program, nine undergraduates participated in workshops about the history of anti-Semitism and led campus outreach projects to increase awareness of anti-Semitism and how to confront it among their peers.

On Aug. 30, UCI’s Center for Jewish Studies will join the Jewish Federation of Orange County’s Rose Project and other community partners to host a one-day “learning experience” focused on combating anti-Semitism. This project is also supported by UCI’s Office of Inclusive Excellence. The Rose Project is a local nonprofit aimed at decreasing anti-Semitism on college campuses.

Henry Samueli, co-founder of Broadcom Corp., and his wife Susan joined The Giving Pledge in 2012. That effort by billionaire families called on participants to donate at least half their wealth to charity.

The Samuelis have a long-standing history of philanthropy aimed at combating anti-Semitism. In 2005, they presented a gift to Chapman University to create the Sala and Aron Samueli Holocaust Memorial Library, named after Henry Samueli’s parents, who survived the Holocaust.

“Susan and I enjoy supporting innovative solutions through many areas, ranging from engineering to health, but this is an area that uniquely touches our hearts,” Henry Samueli said in a statement provided by the school.

Susan Samueli said she hoped their matching gift would inspire others to join their efforts to stem anti-Semitism.

For nearly 20 years, Susan and Henry Samueli have played a substantial role in UCI’s growth. In 2017, they pledged $200 million to create the Susan & Henry Samueli College of Health Sciences, which remains one of the largest gifts in U.S. history to a public university, according to the school.