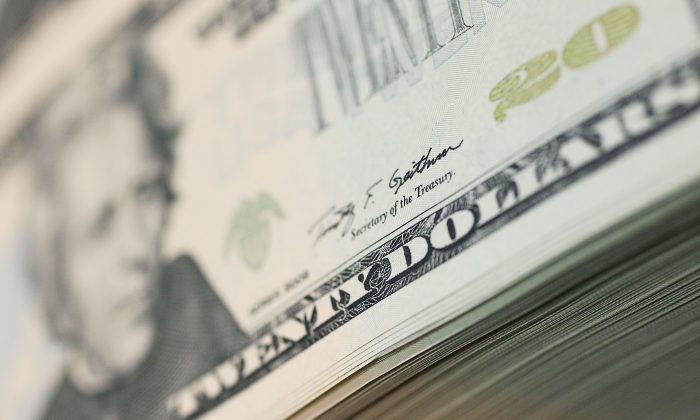 File photo of a stack of new $20 bills bearing Treasury Secretary Timothy Geithner’s signature at the Bureau of Engraving and Printing in Washington, on July 22, 2011. (Mark Wilson/Getty Images)
Crime and Incidents

A California family coming back from the funeral of a loved threw cash out of their car onto a California freeway as an unusual way of honoring the dead relative’s memory.

Officers with the California Highway Patrol said they received multiple calls about cash strewn across Interstate 880 in Hayward, but when they arrived on the scene—the money was gone.

Hayward CHP Officer Manuel Leal told KTVU that a number of individuals had contacted the office on Monday, March 4, about bills wafting along several lanes of the freeway.

Dashcam footage obtained by KTVU shows cars coming to a stop as drivers and passengers rushed out to grab the money on the highway’s southbound lanes.

Singing: money money moneeeey mooneeey!!! On my way home just after noon, these drivers started jumping out of their cars on SB 880 near Winton to pick up money that was on the freeway. @CHPHayward tells @KTVU by the time officers arrived, the cash & the drivers were all gone. pic.twitter.com/YkAB5Tkm9a

The family members, who asked to not be identified, told KTVU that all told they had dumped about $500 onto the freeway in $20 bills.

Casting the money into the wind was, according to a family member, a way to honor their recently deceased loved one.

The cash was thrown out a car window to honor the dead following a funeral https://t.co/YU5HhcaCo1

The incident recalls a similar case that happened last year in New Jersey when an armored truck spilled over half a million dollars in cash along a highway during the morning rush hour and sparked chaos.

Several people ended up crashing their cars amid the money grabbing excitement when an armored Brink’s truck dropped cash all over the Route 3 roadway on Dec. 14, 2018.

East Rutherford Police said two bags containing a total of $510,000 in cash fell out the back door of the armored truck. Officials believe of the truck’s doors may have malfunctioned and become unsecured.

While Brink’s personnel ran around collecting the money, drivers excitedly stopped their cars and ran onto the highway, grabbing money.

Drivers and Brink’s personnel recovered roughly $205,000 on the spot.

Five people later contacted the police and turned in a little more than $11,000. The remaining $293,535 was still missing when the police took to Twitter to announce the incident.

People who pick up and keep money that does not belong to them could be charged with theft, police said.

“It would be like theft of mislaid goods,” police Capt. Phil Taormina said. “The truck was parked on the shoulder and two armed guards, Brink’s employees, were trying to gather the money.”

Earlier that year in May, another Brink’s truck dropped more than half a million dollars on the I-70 in Indianapolis. The truck’s back doors swung open when it slowed to a stop, causing $600,000 in bags, bundles, and loose bills to tumble out.

Like the recent incident, people were also scrambling to pick up cash. But once again, police reminded the public that it’s theft.

Similar incidents happened when an armored vehicle’s doors malfunctioned in June 2016 in Providence, Rhode Island; in July 2015 in Baltimore; in April 2015 in both Weatherford, Texas, and Salt Lake City, Utah; in January 2015 in Queens, New York; in October 2014 in Urbana, Maryland; and March 2012 in Montgomery County, Maryland.