Family Survives Decade of Brutality in China, Finds Healing and Normalcy in US 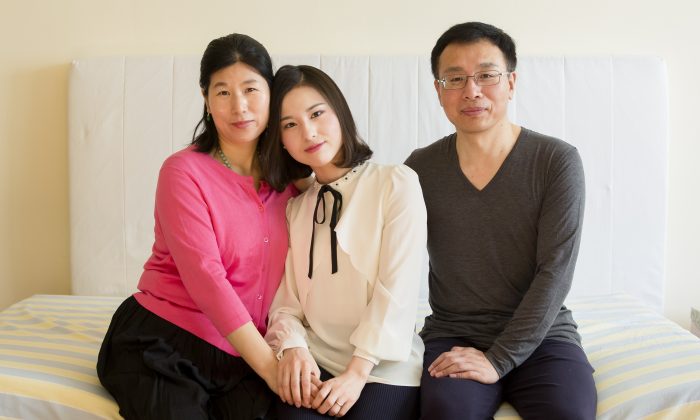 (L–R) Wang Huijuan, Li Fuyao, and Li Zhenjun at their home in Queens, New York, on Jan. 8, 2017. The family escaped China in 2014 and were granted asylum after enduring years of torture for practising Falun Gong. (Samira Bouaou/Epoch Times)
By Charlotte Cuthbertson

When Wang Huijuan was picked up by police at a train station and taken to a detention center to be interrogated in 1999, she struggled so much that the officers were unable to tie her up. So they rammed her head against a wall and whipped her head and face with a metal ruler from a nearby office desk.

“There was lots of blood. My nose and mouth were bleeding, and they shattered my eardrums,” said Wang, a Falun Gong adherent who now lives in New York (and wears hearing aids).

The guard at the train station who turned Wang in had searched her luggage and found fliers and DVDs explaining the Chinese regime’s persecution of Falun Gong (also called Falun Dafa) and exposing the state’s propaganda campaign to vilify the ancient spiritual practice. The police demanded to know who she got them from and where they were being produced.

“I thought one thing then: ‘Even if I have to die, I won’t give up the others’ names and I won’t renounce my faith,’” she said.

But the cost was high. Wang spent the next seven years in prison, all the while apart from her husband and young daughter, where she endured brainwashing, interrogation, physical restraint, beatings, force-feedings, sleep deprivation, and psychological torture.

“They connected everything to ‘transforming’—which meant you sign a statement saying you won’t practice Falun Dafa anymore,” Wang said. “If you didn’t transform, they wouldn’t let you see family, or you would get fired, or your coworkers would get into trouble, or the police officers would be punished. They had quotas.”

And if you did sign a statement, that wasn’t the end of the psychological torture; you would be used to help transform other adherents of the practice, which is based on the tenets of truthfulness, compassion, and tolerance.

Wang’s husband Li, a successful television anchor, suffered a similar fate—yet another of the tens of thousands of victims of the Chinese Communist Party’s brutal persecution campaign launched against Falun Gong adherents in 1999.

His head was shaved, he was given his navy blue prison garb, and he was assigned a top bunk in a tiny room with six bunk beds. There were no mattresses; the prisoners slept directly on the wooden slats and only had a blanket if their family sent one.

“Because it was dark and damp, most people developed scabies or welts,” he said. “At night, you could casually wipe the slats with your hand and kill multiple bedbugs.”

At one stage, Li spent 16 hours a day, seven days a week for more than two years, stitching together commemorative soccer balls for the 2002 FIFA World Cup—all while imprisoned in squalor, unpaid, starving, and tortured.

He had to complete four balls a day, no matter what. The balls required about 1,800 stitches each, and they had 32 panels made up of 20 hexagonal and 12 pentagonal patches. His fingers were often infected and seeped blood and pus from the toxins in the fake leather, especially if he accidentally stabbed himself with the needle.

“We worked from 6 a.m. to at least 10 p.m.,” Li said. “I was considered someone who worked relatively quickly; people who didn’t finish were beaten.”

Beatings were often carried out by other inmates (usually the meanest, said Li) who were keen to curry favor with the guards. In Li’s case, it was a prisoner convicted for enslaving a person in his home for years.

Every night after work, for two hours, Li and the other Falun Gong practitioners were forced to sit hunched over on small stools looking at the floor. If they so much as glanced at each other, they were beaten.

He was told he would be exempt from these “study” sessions if he wrote a statement saying he would stop practicing Falun Gong. Several months into his detainment, exhausted and feeling hopeless, he did.

Not long after, he recanted his statement and asked a police officer to give the paper back. The police refused, and he was given extra punishment. But the psychological burden was lifted.

‘I Knew My Parents Were Right’

Wang and Li were in and out of forced labor camps, brainwashing centers, and prisons consistently over a 10-year period, simply because they refused to renounce their belief in Falun Gong.

Their daughter Fuyao, who was only 6 when her parents disappeared into China’s forced labor camp system for the first time, was looked after by her grandmother.

“I was confused, I didn’t understand what happened,” said Fuyao, now 24 and living in New York. “But I knew my parents were right, because they were standing up for what they believed in.”

Fuyao had her own trials to deal with. Her classmates at primary school, influenced by the relentless propaganda campaign against Falun Gong, shunned her and spat on her books; her parents were barely around; and her only constant was her grandmother, who was sick with worry about her son and daughter-in-law.

The family was finally reunited in 2009 after Wang was released; Li had been out since November 2006, and Fuyao was now 14.

Escaping to a Free Country

Wang couldn’t go back to her job as a schoolteacher and Li had been forced out of his news anchor position the first time he was arrested.

They started a wedding planning business and the shop doubled as a place for them to tell people their stories of persecution and to counteract the state’s anti-Falun Gong propaganda, which everyone in China had seen on state media.

“The only reason we didn’t get sent back to jail was because the local Domestic Security Bureau head was an old family friend and he knew my husband and I were kind,” Wang said. “He protected us, but his superiors continuously put enormous pressure on him to persecute us.”

However, the threat of being detained again always haunted them. Then in 2014, a chance to escape to the United States and seek asylum presented itself and they took it.

“When we got on U.S. soil, all of our fears evaporated,” Wang said. “But the psychological trauma is very hard to erase, and as I breathe the fresh air and enjoy my rights and freedom of belief here, I can’t help but have a heavy heart for my fellow citizens in China.”

Fuyao married in 2016, and the four of them live in a humble apartment in Queens, New York. It’s a happy home and the family is close.

But the painful memories are never far away.

Wang tries to explain: “Sometimes when I’m alone thinking about my experiences in jail, I know that if I didn’t practice Falun Dafa, I couldn’t have survived. That pain, it’s not just physical, it’s a different kind of pain.

“You aren’t a bad person, you want to develop into an even better person, but the Chinese regime uses the most barbaric, evil ways—what good people cannot even imagine—to these Falun Gong practitioners, to their psyche, to try to destroy you from the very bottom—not physically, but psychologically drive you crazy so you have no hope of living.”