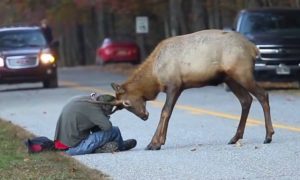 It is a heartwarming moment captured on video, leaving viewers around the world in tears. Making the round on Facebook, the video quickly went viral and warmed the hearts of millions as a serviceman receives the ultimate surprise on his birthday.

The young serviceman, with a birthday quickly approaching, had a surprise arranged by his wife—with a twist that it was extra special and heartwarming. Initially a video, made by his brother, it included old photos and personal messages from his family and friends wishing him well. The messages of “Happy Birthday,” “We love you,” and “We miss you!” came in from nephews and nieces, siblings, parents, in-laws, friends, and other family members across the country and the world, making the moment emotional enough.

But the real surprise was not the video. As it nears its end, a special someone, Matt’s brother, awaits in the other room. Matt approaches a nearby bedroom and enters the door, and shocked to see his brother there in-person to wish him a happy birthday in a loving embrace. Instantly, tears begin to flow as the two are unable to contain their emotions.

This heartwarming video has brought out emotions in viewers from all over the world. People sympathize with the struggle of having someone overseas, unable to hold or connect with them in-person or face to face. The power and genuine reactions between two brothers in this video are as real as they come, and millions have shared the powerful video online. You just have to see it for yourself to appreciate it.