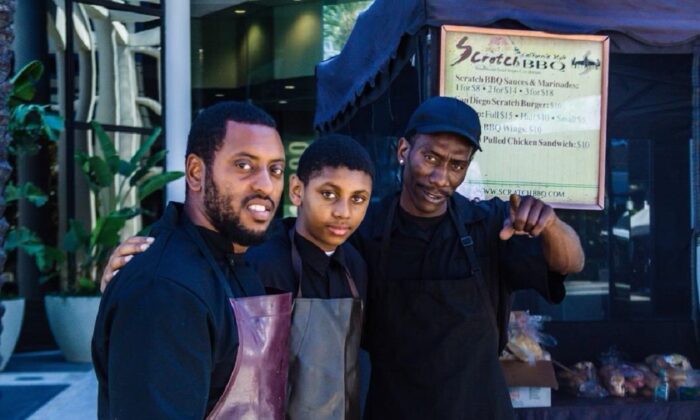 Antonio Mays Jr. (C) with his father in a file photograph. (Courtesy of Antonio Mays Sr.)
Crime and Incidents

The city of Seattle is facing a fresh lawsuit over city officials’ treatment of the autonomous zone that sprang up there in the summer of 2020.

Multiple people were killed in or near the zone, which police officers fled after barricades were erected by radical activists following the murder of George Floyd in Minnesota.

Lorenzo Anderson was the first. He was shot dead on June 20, 2020. It took 30 minutes for first responders to reach him.

Seattle recently agreed to pay $500,000 to settle a lawsuit filed by Anderson’s father. Now relatives of another man gunned down are taking action.

Antonio Mays Jr., 16, was shot on June 29, 2020. Police detectives did not reach the scene until nearly five hours later, according to a claim filed by his family. By that time, according to news reports, the crime scene had been disturbed.

“Through their actions and inactions, the city of Seattle, Seattle agencies, Seattle employees, the County of King, the State of Washington, their agents and elected officials are responsible for the preventable and predictable death of Antonio Mays, Jr. in the early hours of June 29, 2020,” the suit says.

Those named either did not respond to requests for comment or could not be reached.

Mays Jr. traveled from California, where he and his father had a barbeque sauce business, to join protests in Washington state.

“He went to Seattle to participate in the civil rights movement,” Evan Oshan, who is representing the family, told The Epoch Times.

“He had a job, he had a future with money. He wasn’t just some thug on the street. He went to be involved in the civil rights movement in Seattle when he was greeted with this madness and he got executed,” Oshan added.

The zone, known alternatively as the Capitol Hill Autonomous Zone (CHAZ) and the Capitol Hill Occupied Protest (CHOP), drew nationwide attention, with a rising number of complaints by area residents, businesses, and others.

But officials, instead of moving to disband the area or reopening the police precinct there, largely left organizers to operate it on their own.

Then-Mayor Jenny Durkan, a Democrat, said that there could be “a summer of love” due to the organized protest, the claim notes. City officials, meanwhile, actually replaced the barriers with concrete ones amid continued negotiations with the protesters.

“Despite knowledge of the violence and chaos, Seattle leaders allowed it to continue. The ‘summer of love’ inevitably turned into the ‘summer of blood.’ It took several predictable and preventable deaths and life-altering injuries for Mayor Durkan to finally announce that Seattle would move in to take over governance of the ‘CHOP,'” the claim states.

The claim is a precursor to a lawsuit. It is required in the state and gives the government a chance to try to settle. But Mays’s family is determined to sue those they feel are responsible for Mays Jr.’s death.