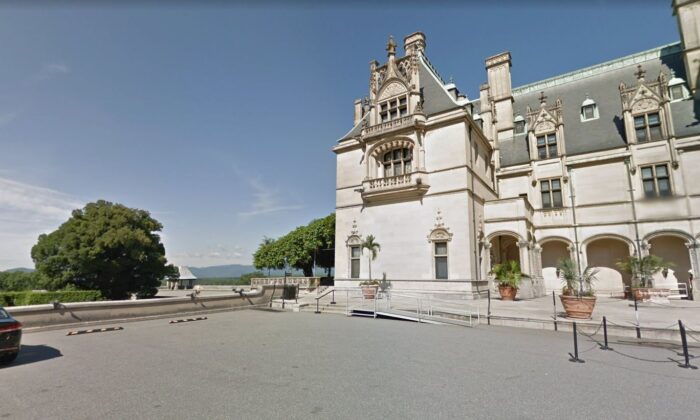 The Biltmore Estate in North Carolina in May 2017. (Google Maps/Screenshot via The Epoch Times)
US News

ASHEVILLE, N.C.—The family of a New York City firefighter killed last month when a tree fell onto the car he was driving at the Biltmore Estate has filed a lawsuit accusing the North Carolina tourist attraction of gross negligence.

Casey Skudin died from his injuries and his wife, Angela Skudin and their two sons were also hurt, including their 10-year-old son, who was knocked unconscious and sustained multiple fractures to his spine and sternum, the lawsuit filed on behalf of Skudin’s family states.

The suit claims the Biltmore “knowingly and intentionally kept a massive, rotted tree on its property next to a main road where Defendants knew it would cause great harm when it fell,” news outlets reported. It claims Biltmore knew the tree posed a danger to guests and tried to keep it by installing steel cables. The complaint names The Biltmore Company, Biltmore Estate Wine Company, and Village Hotel on Biltmore Estate as defendants.

“Defendants decided to install inadequate cable to try and merely keep the tree upright, instead of taking the appropriate measure of cutting the tree down and eliminating the potentially fatal risk,” the complaint states.

In a statement Wednesday, Biltmore noted there were multiple accounts of a short duration high wind event around that time and denied “all allegations of willful or intentional conduct on the part of Biltmore, as well as the allegations of negligence.”

“There are no words to express our deep sorrow for the Skudin family’s unimaginable loss and we offer them our deepest sympathy,” Biltmore said in the statement.