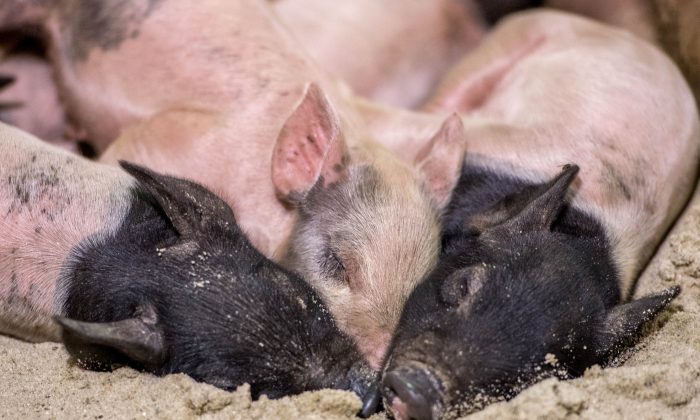 Family Saves Piglet From Freezing to Death in Snow in Maryland

Perry Smith, who was skiing in Maryland with his family, apparently saw something odd in the snow while he was driving back home.

He pulled over in Hagerstown on Friday night and examined a snow-covered hill.

When he got closer, he saw a piglet struggling to make its way through snow on a hill, reported the Washington Post.

Smith realized that the piglet, named Wee Wee, would likely die. He pulled the animal from the snow and used his daughter’s sweatshirt to swaddle it.

A Maryland family saved a snow-bound piglet from freezing in #jonasblizzard, and I’m crying. https://t.co/zqPeS9R8G8 pic.twitter.com/cUa3ndDiWP

Smith and his children brought the piglet back to their hotel where they kept it in the tub. He says he wants to take the pig to their Somerset home and keep it as a pet, but he’s unsure of the local rules about keeping livestock.

“The animal didn’t run [from the car],” Smith said, per WBT-TV. He explained that the pig was basically encrusted in snow and ice, and he later asked local homeowners where the pig came from.

“I told the kids, ‘Listen, we don’t have any choice but to take this pig in. We’re gonna see if we can’t warm him up and we’ll deal with it when we get to the hotel,'” he said, adding that it was a “pretty simple decision” to make.

He said Wee Wee has developed a personality and is responding to its name.

The pig will now be adopted by a local animal rescue group.