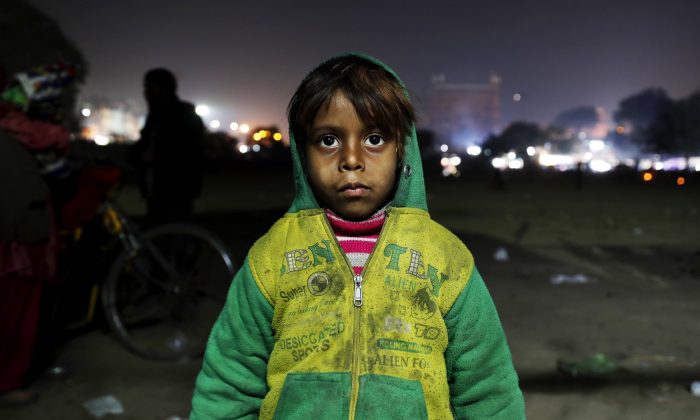 Family on the Fringes Sees Hope in 7-Year-Old

NEW DELHI—Someday, the family says, the 7-year-old will save them.

“I’ll fight,” the boy’s mother said when her husband insisted their son start working. She vowed he would stay in school, no matter what.

More than 20 years ago, Ruby Khan and her husband, Nisar, came to New Delhi, hoping to find work and some sort of future in the Indian capital. They were desperately poor and barely educated.

Ruby had made it only through fifth grade. Nisar never went to school at all, though he has picked up basic reading and math skills over the years. Plus, his legs have been weak and twisted for as long as he remembers, and the barrel-chested man in his early 40s needs a homemade wheelchair to get around. When his parents died, he says his siblings forced him and his wife to leave the family home, a few hours south of here.

So they came to New Delhi. What they found was a life on the fringes, living in a squatter colony in the heart of the old city. The couple and their five children survive mostly from Ruby’s begging, though their two oldest sons get occasional work as laborers.

Their home is mounted on cheap bicycle wheels.

City authorities regularly clear out the squatter camp and often destroy whatever they find. Because of that, some members of the Khan family sleep on a wooden fruit vendor’s cart the size of a large door, with the rest squeezing under a plastic tarp tied to a nearby wall.

If the authorities arrive, the family can quickly pile everything they own—clothes, blankets, birth certificates, bags of whatever—onto the cart and roll it away.

“We are hounded every day,” Nisar says on a drizzly winter afternoon, a disheveled man in a dirty polyester jacket who still manages, somehow, to look courtly. “Even dogs live better than us.”

The family rarely has more than a few dollars between them. The oldest son, 17-year-old Armaan, dropped out of school to try to find work. The middle son, 13-year-old Ajmeri, dropped out when he was bullied because of a speech impediment. Neither works very often.

The oldest daughter, 16-year-old Mehendi, often spends her days helping out at a makeshift school for homeless children but earns no pay. The youngest daughter is just 3 months old.

So all hope rests on Farmaan, a 7-year-old with enormous eyes and scraggly hair. Farmaan was the son Ruby defended when her husband tried insisting he leave school to beg.

In a family where education was rarely even an afterthought, Farmaan has always loved school. Asked on a recent day what he’d learned in class, he happily listed all his lessons. Then, for good measure, he recited the English alphabet forward and backward.

He hasn’t done much in his short life. But simply by staying in school, he’s become the focus of the family’s dreams. Both parents try to help him with homework, and Nisar now agrees that Farmaan shouldn’t start working, at least not yet.

Together, Farmaan’s parents have mapped out his future: high school graduation, a job, money.

He is their hope.

“He has to make something of himself first,” Ruby says. “Then he can take care of us.”