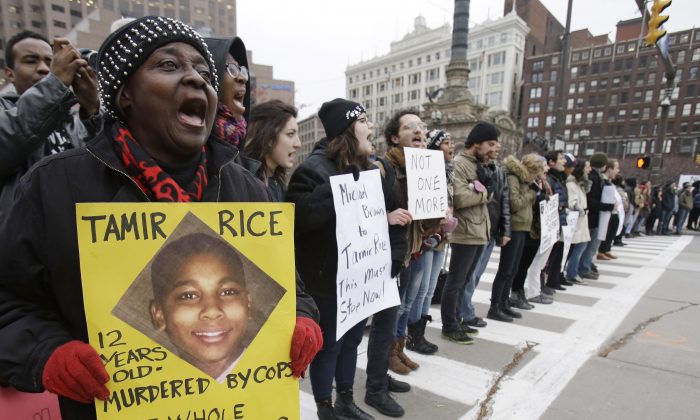 Demonstrators block Public Square in Cleveland on Nov. 25, 2014 during a protest over the shooting of 12-year-old Tamir Rice. (AP Photo/Tony Dejak)
Crime and Incidents

The city of Cleveland, Ohio, agreed on April 25 to pay $6 million to the family of Tamir Rice—the 12-year-old African-American boy who was shot by a white police officer in 2014.

The U.S. District Court in Cleveland said the city will pay $3 million this year and the other half next year. Tamir’s estate will receive $5.5 million, while his mother Samaria Rice and his sister Tajai Rice will each receive $250,000. The deal does not resolve any other legal issues, and there was no admission of wrongdoing in the settlement.

“The resolution is nothing to celebrate because a 12-year-old child needlessly lost his life,” said the Rice’s attorney, Subodh Chandra. Rice was shot while playing with a pellet gun outside a recreation center on Nov. 22, 2014.

The wrongful death suit filed by his family and estate against the city, officers, and dispatchers who were involved accused the police of acting recklessly when they confronted the child.

A video of the incident shows rookie patrolman, Timothy Loehmann, stopping his vehicle and firing within 2 seconds of opening the car door.

Rice, who lived across the street from the recreation center and played there almost daily, was not given first aid until after about four minutes. He died the next day.

Samaria Rice claimed police failed to immediately give the boy medical attention and caused intentional infliction of emotional distress in how she and her daughter were treated after the incident.

The shooting of Tamir brought into light the treatment of police toward blacks, and sparked protests in the city. The protests helped begin a state police standards board to lay out rules about use of deadly force in law enforcement.

Leading Up to the Shooting

Tamir was killed after a man drinking alcohol and waiting for a bus outside the recreation center called 911, saying there was an individual waving a gun and pointing it at people. The man said the person holding the gun was probably a juvenile and that the weapon was probably not real, however, the 911 dispatcher did not tell police that piece of information.

Rice was holding a plastic airsoft gun that shoots nonlethal plastic pellets. He had borrowed it from a friend that morning, who had warned him to be careful since the gun looked real because it was missing the telltale orange tip.

A grand jury decided to not bring charges against the police officers and a federal civil rights investigation is pending.

Below is the court filing: