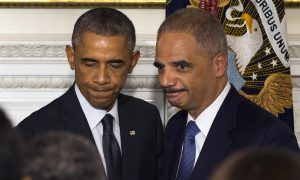 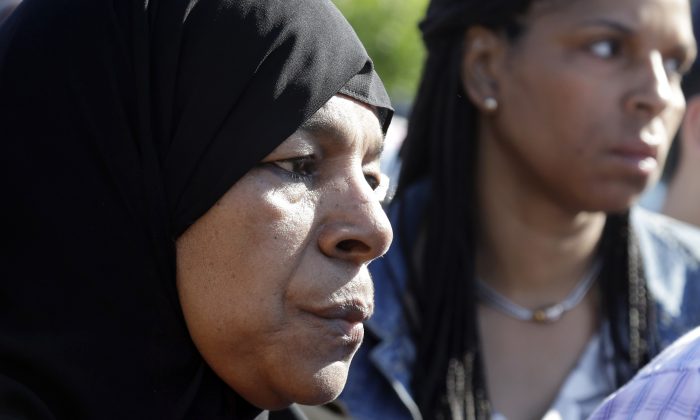 Rahimah Rahim, left, mother of shooting victim Usaama Rahim, listens during a news conference Thursday, June 4, 2015, in Boston's Roslindale neighborhood in the area where Rahim was shot to death. (AP Photo/Elise Amendola)
US

Family of Man Shot by Terror Investigators Shocked by Claims

BOSTON—A Boston man shot to death by terrorism investigators showed no signs of radicalization, and his family was completely shocked by allegations that he planned to kill police officers, the family’s attorney said.

Ronald Sullivan, a Harvard Law professor, said Usaama Rahim’s family considered him “an energetic young man trying to make his way in this world” and saw no behavior or changes in demeanor that would lead them to suspect he would espouse violence.

Surrounded by Rahim’s brothers, mother and wife on the sidewalk where Rahim was shot, Sullivan said Thursday that they hope to work “productively and cooperatively” with investigators in a “joint effort to search for the truth.”

Anti-Terrorism Movement in Europe Highlights Unclear Path for US

“Let me be clear: The family is not making any substantive claims at this time about what happened in this case,” Sullivan said. He said the family planned to view a video of the shooting later Thursday, but said that may not tell the whole story.

Rahim, 26, was fatally shot Tuesday after investigators said he refused to drop a military-style knife as they sought to question him about “terrorist-related information.” Police have said the video shows officers backing up and Rahim moving toward them before they fired.

Sullivan said Rahim’s brother Ibrahim Rahim, a well-known imam in Boston, regrets posting a Facebook message based on incorrect, third-hand information claiming that his brother had been shot three times in the back.

“We now know we simply did not have all the facts at that time,” Sullivan said.

Police Commissioner William Evans said Rahim had talked about beheading blogger Pamela Geller before deciding to target police officers. “There was some mention of that name,” said Evans, who dismissed the idea as “wishful thinking” while speaking on the “Today” show.

A Muslim leader said Thursday that his killing by Boston Police and the FBI was reckless and unnecessary. Imam Abdullah Faaruuq, who is close to the Rahim family, said he believes they wanted him dead.

“You can capture elephants, lions and tigers without killing them,” Faaruuq said. “The intent was not to capture him and keep him alive.”

Rahim will be buried Friday, but the family is keeping it private.

Geller is a combative personality known for provoking Muslims by campaigning against a mosque near the World Trade Center site, sponsoring inflammatory advertisements and organizing Prophet Muhammad cartoon contest in Texas.

“They want to make an example out of me to frighten the rest of the US into silence and submission,” Geller wrote in an email to the AP on Thursday. “This is not about me. This is about whether the US will stand for freedom or submit and cower before violent intimidation.”

The FBI said Rahim and his nephew, David Wright, plotted to commit some kind of attack, and that Rahim ordered three large knives on Amazon.com a week earlier.

The FBI said police confronted Rahim after he told Wright Tuesday that he had changed his mind about beheading an out-of-state victim, and instead planned to kill local police officers either Tuesday or Wednesday.