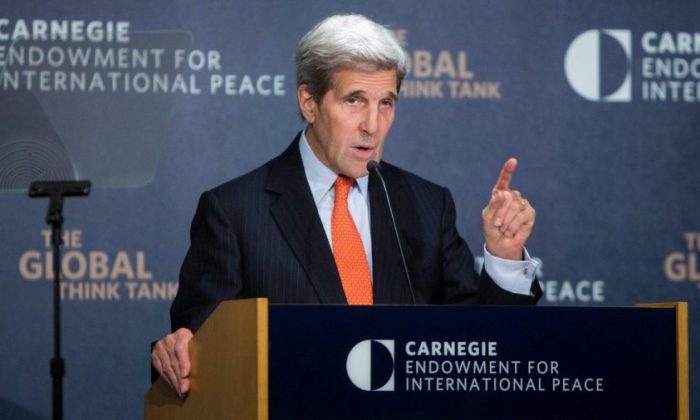 Family of John Kerry Fights for Wall Around French Property

The family of former U.S. presidential candidate and Obama administration official John Kerry is fighting for a wall around the French property they own, arguing that people shouldn’t have access to the public beach.

French law dictates that the country’s coastlines must remain open to all but property owners in Saint-Briac-sur-Mer have for years blocked access to part of the coast.

The coastline in question will finally open to all in January unless the latest round of lawsuits succeeds.

At the head of the refusal to obey French law is Brice Lalonde, the first cousin of Kerry. Their grandfather James Forbes bought the Essarts castle in the town in 1928 and it has remained in the family since.

A French biography of Kerry says his American parents met at the estate before World War II. Kerry speaks French and regularly spends time at the estate.

Lalonde claimed that the Emerald Coast path, which will go along the coast, would disrupt the lives of property owners in the area and would knock down walls the owners have erected to keep people out.

“The path will impact the well-being of residents by knocking down their walls and ruining their privacy,” Lalonde told AFP in a statement. He said there were “terrorist risks” if the path is opened, “since it will be fairly easy to target members of my family who are politically active.”

Work on the path has already begun, going through a beach in one home’s garden wall and directly next to a private swimming pool.

“The state is advancing methodically and with determination,” said David Harel, the government’s deputy director of ocean and coastline management for the region.

The similarities between the struggle for safety for private property owners and the United States government has been noted by some political analysts.

President Donald Trump has been pushing for a wall along the southern border of America since launching his campaign in 2015 and has continued trying to get the wall built since becoming the nation’s leader.

But Kerry and many other Democrats have opposed the wall, even though many of them had expressed support for a barrier within the past decade.

Most Democrats voted for legislation in 2006 that authorized building a barrier along the southern border. Kerry, then a Senator for Massachusetts, voted against it.

Kerry has not weighed in on the situation in France.

Kerry has repeatedly voiced opposition to Trump, in November claiming that it was an embarrassment that the president didn’t travel in the rain to visit a cemetery near Paris. The White House explained at the time that the Secret Service canceled the trip because the weather wouldn’t allow the helicopter to fly and that if Trump traveled via motorcade, it would cause serious traffic problems in France’s capital.

While still Secretary of State under Obama, Kerry said in a speech that walls wouldn’t keep people from illegally entering the United States.

“I think that everything that we’ve lived and learned tells us that we will never come out on top if we accept advice from soundbite salesmen and carnival barkers who pretend the most powerful country on Earth can remain great by looking inward and hiding behind walls at a time that technology has made that impossible to do and unwise to even attempt,” he said.

“You’re about to graduate into a complex and borderless world.”