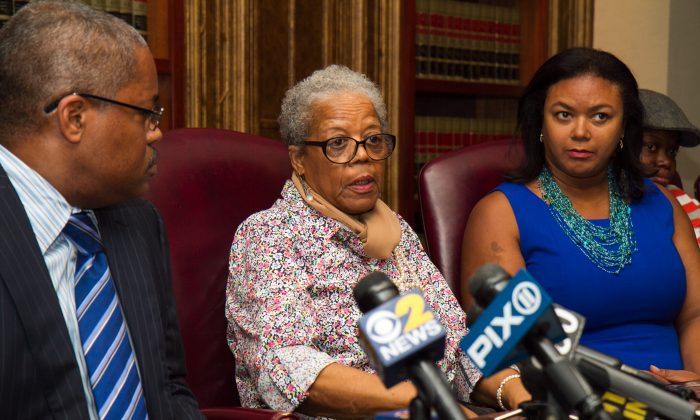 Alma Murdough, mother of former Marine Jerome Murdough, speaks as Tracy Brown (R) and Attorney Derek Sells (L) listen during a news conference about her son, who was found dead in a 100 degree cell on Rikers Island, in New York City on May 16, 2014. Sells plans to file a wrongful death lawsuit against the city on behalf of Alma Murdough for the death of her son. (Benjamin Chasteen/Epoch Times)
New York

NEW YORK—The mother of the man who died in an overheated jail cell at Rikers Island has sent initial paperwork to the city declaring her intent to file a $25 million lawsuit.

The lawyer for the family, Derek Sells, has also asked the Manhattan Supreme Court on May 16 to order the city to preserve any information and documents related to the case.

Jerome Murdough’s body was found at an overheated cell at Rikers Island on Feb 15. Murdough was a veteran, mentally ill, and homeless.

Four hours after Murdough’s body was found and removed from the hot cell, his body temperature was recorded at 103 degrees. The temperature in the cell, four hours after a window had been opened, was measured at 101 degrees, the family’s lawyer said.

The initial conclusion as to the cause of the death was hyperthermia, although a final autopsy report has not yet been released.

Murdough was found on the floor of his cell in a pool of blood and vomit. Sells, the lawyer, said that the presence of blood raises additional questions.

Murdough was arrested on trespassing charges in February and brought to Rikers Island. He was flagged with mental illness when processed at the jail. Sells said on Friday that prison authorities should have placed him under continuous observation. According to Sells, neither the prison guard, nor that guard’s supervisor, were anywhere to be found as Murdough remained in the hot cell.

“This is a tragedy which could have been avoided, but because of the negligence of the city of New York and those that work for the city Jerome is not here,” Sell said.

Murdough’s mother, Alma Murdough, said that she was angry with the Department of Corrections, since no one reached out to her since her son died.

“I feel terrible. I feel very, very bad, because I can’t believe it right now. I cannot really believe it,” Alma Murdough said.

The city has 30 days to respond to the notice of claim that the family lawyer sent on May 1.