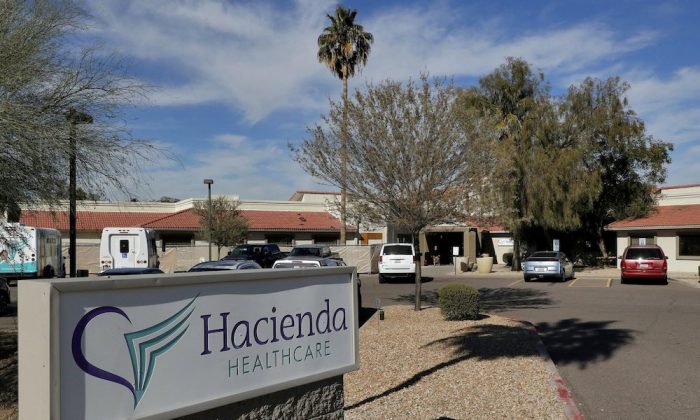 The Hacienda HealthCare facility in Phoenix, on Jan. 25, 2019. (Matt York/AP Photo)
US News

Family of Incapacitated Woman Who Was Raped Blames Arizona

PHOENIX—The parents of an incapacitated woman who was raped and later gave birth at a Phoenix long-term care center alleges in a $45 million legal claim that the facility and state broke their promise to have only female caregivers tend to their daughter.

A nurse charged with sexually assaulting the 30-year-old patient had cared for her more than 1,000 times in the 13 months leading up to the birth, according to an expert cited in the claim filed Wednesday, May 22, against Arizona.

Many of Nathan Sutherland’s encounters with the patient at Hacienda HealthCare occurred overnight when fewer staff members and visitors were around, said Christopher Cherney, a professor with more than 20 years of experience as a long-term care facility administrator who reviewed the woman’s medical records.

The family alleges in the precursor to a lawsuit that Hacienda missed dozens of signs that the woman was carrying a baby and discovered the pregnancy only after another nurse saw the boy’s head. The patient, who has a feeding tube and whose nutrition was reduced in response to her weight gain during the pregnancy, delivered the boy while severely dehydrated and without pain medications, the claim said.

The family’s lawyers say the woman suffered injuries from repeated sexual assault. Notes from the hospital where she was treated say her injuries suggest it wasn’t her first pregnancy, but no other details were provided.

The surprise birth on Dec. 29 triggered reviews by state agencies, highlighted safety concerns for patients who are severely disabled or incapacitated and prompted the resignations of Hacienda’s chief executive and one of the victim’s doctors.

A spokeswoman for the Arizona Department of Economic Security, which oversaw the woman’s care, did not return a message seeking comment. Hacienda spokesman David Leibowitz and Sutherland’s lawyer, Edwin Molina, declined to comment.

Representatives from Hacienda and the state had told the woman’s parents that their daughter would have only female caregivers, the claim said. Documents from the Department of Economic Security note that only female staff members should provide her personal care, such as bathing and dressing.

Cherney, the expert for the family, said Sutherland conducted safety checks, administered medications and wrote notes on the woman’s status during his many encounters with her.

Investigators say Sutherland’s DNA matched a sample from the woman’s son, who is being cared for by her family.

Sutherland has pleaded not guilty to charges of sexual abuse and abuse of a vulnerable adult. He is challenging a court order requiring tests to see whether he has HIV or other sexually transmitted diseases.

The victim began suffering seizures at 2 months old and her medical conditions stem from a brain disorder diagnosed afterward, family attorney John Michaels said. The disorder caused the motor and cognitive impairments and vision loss. She was also left with no functional use of her limbs.

News organizations, including The Associated Press, previously reported that she was in long-term care after a near-drowning.

Despite her disabilities, her family says she responds to some sensory stimuli. She turns her head toward sounds she finds pleasing like soft music or being read to, the claim said. She can groan and smile. Despite being non-verbal, she will cry and make “throaty sounds” if she is feeling pain or discomfort.

The claim said that Arizona has a duty to provide services to people with developmental disabilities by contracting with companies like Hacienda and that the state did a poor job of monitoring its operations.

While the claim heavily criticizes Hacienda and Sutherland, it seeks money only from the state.

It said Hacienda missed 83 opportunities to diagnose the woman’s pregnancy. She gained weight, had a swollen belly and missed menstrual periods in the months before the child was born.

The family’s lawyers said a simple blood test would have revealed the pregnancy.

By Terry Tang And Jacques Billeaud