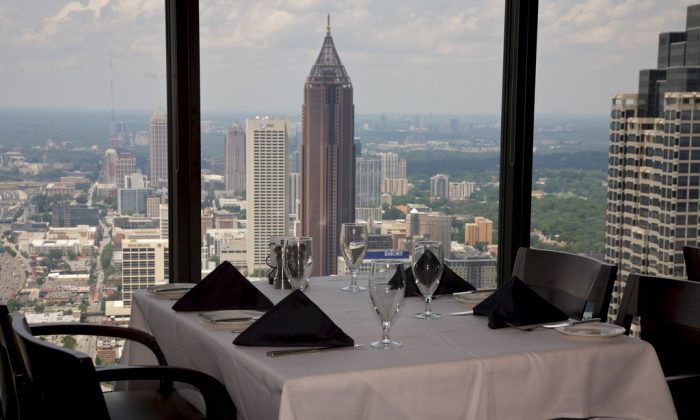 The parents of a 5-year-old boy who died when his head was crushed in a rotating restaurant are suing the company that owns the establishment.

Charlie Holt died on April 14 after he got stuck in a pinch point between a rotating booth and a stationary wall at the Sun Dial restaurant located on top of the Westin Peachtree Hotel in Atlanta, Georgia, The Atlanta Journal-Constitution reported.

Marriott International, Inc., which owns the restaurant and the hotel, and Starwood Hotels and Resorts Worldwide, LLC, were both named in the suit.

The suit charges that the company failed to address a “longstanding safety hazard” that led to Holt’s death, the Journal-Constitution reported.

“The Sun Dial had no protections to stop children from getting close to the pinch point or to stop the rotation of the floor if a child became trapped in the pinch point,” the lawsuit states, the Journal-Constitution reported.

Rebeca and Michael Holt went to the restaurant with their son Charlie during a visit to Atlanta from North Carolina.

Atlanta police claim that Charlie wandered away from the table while the family was eating, but the lawsuit disputes that claim, saying that Charlie was just a few steps ahead of his parents as they departed the restaurant.

Security staff and employees at the Westin freed the boy, but it was too late. He died later at Grady Memorial Hospital.

“The family was leaving the restaurant together after paying their bill,” Joe Fried, the family’s attorney, told the Journal-Constitution in an email on Thursday. “They were walking to the exit, following the same path that the hostess used to walk them to their table and that they used to walk to and from the restroom earlier. Charlie was only a few steps ahead.”

According to Fried, the family’s path was blocked while a booth rotated in front of a stationary wall and the boy got trapped between the booth and the wall.

“By the time someone could manually stop the rotation, it was too late,” Fried said. “Charlie’s head had been pulled into the narrow pinch point and he suffered catastrophic head trauma—right in front of his parents.”

The stop button was located on the ceiling in another room of the restaurant, the suit says, according to CNN.

The lawsuit demands a trial but does not specify the damages the family is seeking.