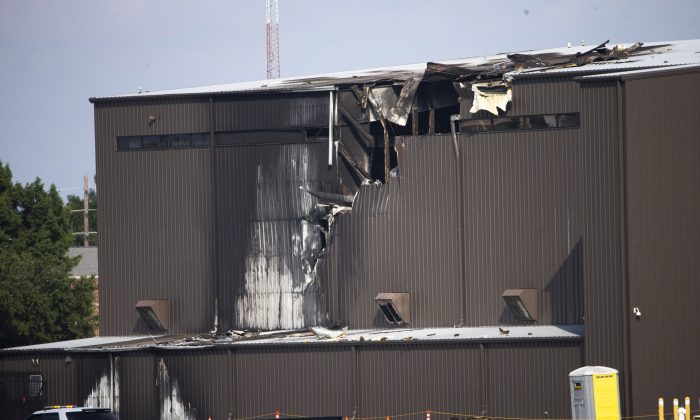 Damage is seen to a hangar after a twin-engine plane crashed into the building at Addison Airport in Addison, Texas, on June 30, 2019. (Shaban Athuman/The Dallas Morning News via AP)
Crime and Incidents

Family of 4, Including 2 Children, Among 10 Killed in Plane That Crashed During Takeoff

A family of four was among the 10 killed in a plane that crashed during takeoff at Addison Airport on June 30.

Two boys and their mother and step-father were identified in a letter released by the school of one of the children on Monday, reported NBC DFW.

Local authorities and witness told The Associated Press that the plane had difficulty gaining altitude and after taking off, it deviated towards the left and crashed into a hangar.

Beechcraft BE-350 King Air hit an unoccupied hangar after 9 a.m. and immediately caught fire that was in some time contained by the firefighters. The crash also damaged a Falcon jet and a helicopter that were inside the hangar.

There were no survivors of the twin-engine plane crash, according to Mary Rosenbleeth, spokeswoman for the town of Addison, Texas.

Dallas Morning News reports that officials have identified six out of the 10 victims, including the family of four.

Multiple media reported that John Paul II High School in Plano sent a letter to families on Monday sharing that one of its students, Alice Maritato, who would have graduated in 2022 died along with his brother, Dylan, his mother, Ornella Ellard, and stepfather, Brian Ellard.

Dylan was a student of All Saints Catholic School and he would have finished eighth grade in 2020, the letter mentioned.

The other two identified are the managing director of Dallas commercial real estate and his wife. JLL real estate company sent an email to its employees sharing the sad news about the death of Steve Thelen and his wife, Gina, in the crash. They are survived by their son and daughter, who were not in the plane.

“Steve was among the best of us—a leader, partner, and friend,” the email said according to Dallas Morning News. “Our thoughts are with his son, Kyle, and daughter, Christy, during this difficult time. Please keep them in your thoughts and prayers.”

4WWL reported that the plane wasn’t carrying a black box, but was equipped with electronic recording equipment that explained what happened. No one was present inside the hangar when the crash happened.

Ladd Sanger, a pilot with hangar space at Addison Airport who is also an aviation attorney, told 4WWL that the National Transportation Safety Board (NTSB) will look into various factors that might have caused the plane to crash, including engine failure or improper weight distribution.

“The fact that this airplane was so close to the ground and departed controlled flight so abruptly–means there has to be something that went seriously wrong–and the pilot had very very little time,” Sanger said.

Another aviation specialist and plane crash investigator who is not investigating this crash told Dallas Morning News that Beechcraft Super King Air is a well-liked plane.

He said it may take NTSB almost a year to release a final report but a preliminary analysis could be available sooner. He said one should wait before blaming anyone.

He said the cause would come out depending “on how easy it is to salvage the wreckage.”

The plane was owned by EE Operations that is registered in Delaware, according to NBC DFW.

“I visited the scene and was briefed by incident command. Please pray for the families who lost loved ones in this tragedy. Team in process of notifying them,” Judge Clay Jenkins said in a Tweet.

It is the deadliest plane crash to happen in Texas since Sept. 12, 1991, when 14 people died after a plane crashed in Eagle lake while on its way to Houston.