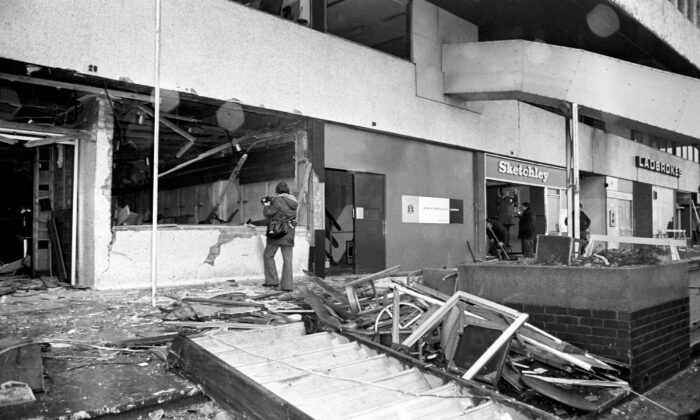 Undated photo of the bomb-blasted remains of the Mulberry Bush pub, at the foot of the Rotunda in Birmingham, United Kingdom. (PA Media)
UK

The family of a woman who was killed in the bombing of a Birmingham pub by the Provisional IRA in 1974 has sued West Midlands Police and a man they claim was one of the bombers.

Margaret Smith, whose 18-year-old daughter Maxine Hambleton was killed in the Tavern in the Town pub on Nov. 21, 1974, has issued a civil writ against Michael Patrick Reilly and the Chief Constable of West Midlands Police, Sir David Thompson.

Reilly, who is in his 60s, was arrested in November 2020 under the Terrorism Act and questioned by police in connection with the bombing of the Tavern in the Town and the Mulberry Bush, which killed 21 people and injured 200. But he has always denied any involvement with the incident.

Reilly’s lawyer Padraig O’Muirigh said: “I can confirm that legal proceedings have been issued against our client. Our client repudiates the claims made by the plaintiff in their entirety and the legal proceedings issued will be strenuously defended. My client has never been convicted of any offence in relation to the 1974 pub bombings.”

Smith’s lawsuit claims West Midlands Police’s original investigation, which caught the wrong people and allowed the real bombers to escape justice, was negligent and in breach of its statutory duty.

The attack on the pubs was part of the Provisional IRA’s mainland bombing campaign, which targeted civilians in England in an attempt to force the British government to accept a united Ireland.

As well as the bombs in the two pubs, a third device failed to go off but West Midlands Police managed to lose it.

Sixteen years later, following an investigation by journalist and later MP Chris Mullin, their convictions were quashed at the Court of Appeal.

The Hambleton family is applying for legal aid in Northern Ireland to help fund the action but say they will crowdfund the money if unsuccessful.

Under the Northern Ireland Troubles (Legacy and Reconciliation) Bill, which was unveiled in the Queen’s Speech but has yet to become law, new civil lawsuits relating to The Troubles would be null and void.

A West Midlands Police spokeswoman said, “We can confirm we have received a civil writ.”