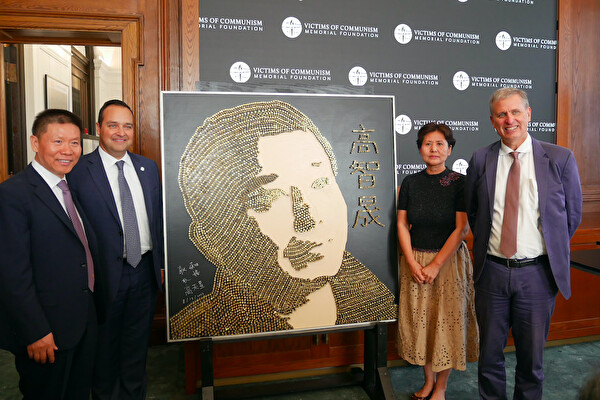 WASHINGTON, D.C.—Prominent Chinese human rights lawyer Gao Zhisheng’s wife Geng He unveiled a sculpture of Gao at the Victims of Communism Museum in Washington D.C., on Sept. 20. The sculpture is a floating portrait of Gao Zhisheng made by Geng He and their two children using 7,355 bullet shells.

Due to his work defending persecuted religious and ethnic minority groups, human rights activists, and Falun Gong practitioners, Gao Zhisheng has been subjected to enforced disappearance, torture, illegal house arrest, and detention by the Chinese Communist Party (CCP) for almost 2 decades. The last time Gao was kidnapped by the CCP police from his home in Shaanxi province was on Aug. 13, 2017. There has not been any information about Gao’s whereabouts since then.

Gao’s wife and two children escaped to the United States in 2009. “Our family finally is reunited in this sculpture, spiritually,” said Geng He at the event hosted by ChinaAid and Victims Of Communism Memorial Foundation. “My husband has been persecuted by the CCP just because he adheres to his conscience and the professional ethics of a lawyer. Five years ago, he was illegally kidnapped, since then, no one knows if he is alive or dead.”

Grateful to be a U.S. citizen, Geng He expressed her wish that the U.S. embassy officials in China could go to Gao’s hometown to find him. “Please lend a helping hand—no one can stand idly by in the face of such a humanitarian disaster.”

Sculptor Chen Weiming, who designed the sculpture, spoke at the event. He talked about the significance of using bullet shells, “the reason we use bullet shells is to symbolize that people like Gao and his family have been deflecting bullets from dictatorship for us who live in a free society.”

Chen said that “the U.S. government is obligated to help free Gao Zhisheng. What has 30 years of appeasement policy [towards the CCP] brought to the U.S.? More hatred towards the U.S. and all-out infiltration into our democratic society by the CCP.”

The bullet shells were collected by Gao’s 18-year-old son from a shooting range in the Mojave Desert under the scorching southern California sun in June. The family worked day and night for 20 days straight to produce the sculpture.

Scott Busby, Acting Principal Deputy Assistant Secretary of State, attended the event and said, “We call on the People’s Republic of China (PRC) to account for Gao’s whereabouts and cease its efforts to silence journalists, lawyers, and others who seek to report the truth and defend human rights.”

Busby says that the PRC’s efforts in silencing human rights activists have been ongoing both inside and outside China, including in the United States, and that “the U.S. is working to capture the PRC’s transnational repression tactics, including in conjunction with our own law enforcement as appropriate to protect those targeted by the PRC.”

President and CEO of Victims Of Communism Memorial Foundation, Andrew Bremberg said, “Gao Zhisheng has been missing since August 2017. We will continue to call on the Chinese government to unconditionally release all detained human rights lawyers and call on the US and other governments around the world to do the same. It’s important for the international community and also for the people of China.”