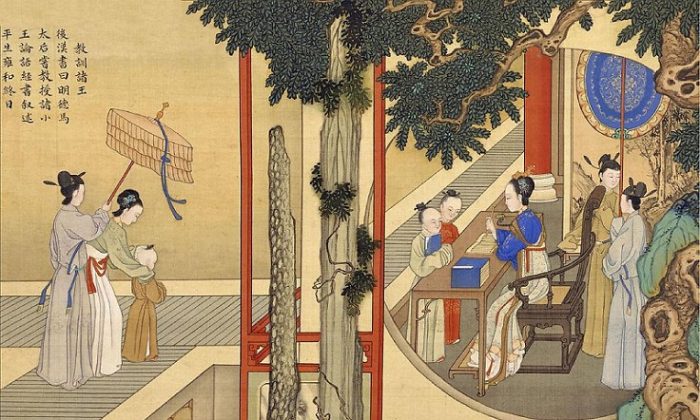 Empress-Dowager Mingde of the Han Dynasty instructs the young princes in the Confucian classics in this scene from the “Album of Virtuous Empresses in Successive Dynasties,” by Qing Dynasty court painter Jiao Bingzhen. (Public Domain/Wikimedia Commons)
China

When parents and children enjoy being together while learning and improving skills, it creates the perfect conditions for strengthening family relationships and enhancing lifelong learning.

These are some of the goals of family literacy, which focuses on interactions between generations in the family and community that foster a culture of learning and the development of literacy and other life skills.

Inter-generational teaching and learning are longstanding traditions rooted in many cultures.

While this may be a specialized and relatively new field originating in the West, inter-generational teaching and learning are longstanding traditions rooted in many cultures. In modern times, some countries have designated times of the year for celebrating family literacy, such as in January in Canada and in November in the United States.

Canada’s Family Literacy Day on Jan. 27 highlights the joys and benefits of this integration of learning and everyday living. Epoch Times takes this opportunity to showcase some inspiring stories and sayings from ancient China.

‘Teaching and learning are mutually beneficial’

If you are a parent, you might have noticed that when you teach your child, learning occurs for both of you, be it some skill or knowledge, a good principle, or a lesson learned.

Confucius, the Greatest Sage and Teacher in Chinese History

A passage in the “Classic of Rites,” or “Liji,” one of the core texts of Confucianism, refers to two expressions that speak to this experience: “Teaching and learning are mutually beneficial,” and “Teaching is the other half of learning.”

Teaching is the other half of learning.
— 'Classic of Rites'

In this way, teaching and learning complement and advance one another, helping both the teacher and learner grow.

While the term “literacy” encompasses much more than just reading and writing, these two skills, along with arithmetic, are indeed what we often think of as the basics of education.

There is a well-known story about a dedicated parent from the Northern Song Dynasty (A.D. 960–1127) who used her wisdom and determination to overcome adversity and teach her son how to read and write.

That son was renowned writer and historian Ouyang Xiu (A.D. 1007–1072), who lost his father when he was only 4 years old. The family was left impoverished, and the mother and son often did not have enough to eat, let alone have money to buy pen and paper or send Ouyang Xiu to school.

However, Ouyang Xiu’s mother did not give up on her son’s education because of this. Instead, she came up with a solution—using a reed to teach him how to read and write in the dirt on the ground outside. This is the origin of the idiom “writing with a reed to teach one’s son.”

As Ouyang Xiu grew older, his mother brought him to their neighbour’s home to borrow books to read, and sometimes copied down the contents of those books.

Guided and encouraged by his mother, Ouyang studied diligently and at age 23 passed the imperial examinations as the top scholar. He went on to hold important positions throughout his 40-year political career.

As a government official, he never forgot his mother’s teaching—to follow his father’s example and serve the people in an honest, upright, and compassionate manner, never seeking wealth and self-interest but rather always helping those in need.

Their story can be likened to the journeys of overcoming adversity of the many refugee and immigrant families resettling in other countries. It also reflects the experiences of many parents and caregivers who themselves face life challenges but nevertheless do everything they can to support their children’s education.

Those adults themselves set good examples to follow, such as those of hard work, perseverance, resourcefulness, resilience, treasuring learning, and giving back.

There is a Chinese idiom that describes “using words to teach and personal action as a model.” Another idiom says we can “educate without using direct/standard teaching methods.”

These idioms remind us that it is entirely possible and natural to influence and teach simply through our everyday activities and interactions.

It is not limited to the usual literacy activities of reading, writing, and doing homework.

It could be through playing a game, cooking or baking, making a budget, planting a garden, or watching the stars. Your children are also learning when they see how you treat others, solve a problem, resolve a conflict, and correct your mistakes. It is not limited to the usual literacy activities of reading, writing, and doing homework.

Parents should also consider that they have the ability to greatly enhance their children’s education and learning just by sharing their own wonder about the world.

Observe your surroundings and show that it’s natural to have questions and that it’s important to ask when we don’t understand. Take the lead in demonstrating how enriching it is for everyone to discuss ideas and find answers and solutions together.

You might have some personal experiences of how the curiosity of children led you to discover and learn something new and valuable.

Speaking to the value of inquisitiveness and the power of curiosity is another Chinese idiom that’s variously translated as “being curious about what’s unusual,” “being interested in what’s different,” or “paying particular attention to what’s out of the ordinary.”

This idiom might come to mind when you or your children venture to ask why, why not, or what if. You might have some personal experiences of how the curiosity of children led you to discover and learn something new and valuable.

A respectful attitude is one of the key ingredients impacting motivation and outcomes in learning. There is a story about how eminent Northern Song prime minister and historian Sima Guang (A.D. 1019–1086) taught his son about respect and other important qualities of a good person and student.

One day Sima Guang saw his son handle a book very casually while reading, so he used the opportunity to counsel his son.

“A noble person is fond of studying the classics of the sages. He must first of all cherish and take good care of books,” Sima Guang told his son.

“Before studying, he washes his hands, cleans the surface of his desk, and puts on a tablecloth. While reading a book, he sits up straight, maintains a respectful attitude, and focuses on his learning, never allowing his mind to wander. He conducts himself in a simple, down-to-earth manner and is steadfast in his work.

Grand Book of History a ‘Mirror’ for Chinese Emperors

“Only by fulfilling these requirements can one properly cultivate one’s moral character, manage one’s household, and be capable of going as far as ruling a country and bringing peace to the land.”

Under his father’s guidance, Sima Kang devoted himself to learning and self-improvement. He grew up to be just like his father in terms of both virtue and scholarly achievement. Their example gave rise to the saying, “Those worthy of serving as role models for others, they are the Sima father and son.”

In Praise of Virtuous Grandparents and Other Caregivers

Among other respected role models from ancient China is Empress Mingde (“Clear Virtuous Empress”) of the Eastern Han Dynasty (A.D. 25–220).

Mingde was a kind and modest woman who was also intelligent and learned. She did not have any children of her own but acted as the mother of one of her husband’s sons. She looked after him with great care, treating him as if he were her own child.

When the boy later ascended the throne, Mingde became empress-dowager. In this role, she devoted herself to looking after grandchildren and teaching them the classic texts of past sages.