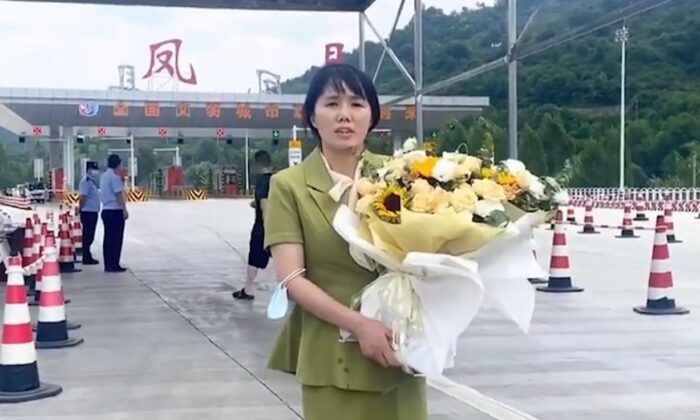 A video still of Chen Zijuan, the wife of lawyer Chang Weiping's who was blocked by authorities from attending her husband’s trial on July 26, 2022. (Twitter video screengrab)
China Human Rights

“I am witnessing a crime scene,” said Chen Zijuan, wife of detained human rights lawyer Chang Weiping, in a video posted on Twitter.

Chen made her video plea after she and other family members were blocked by police from attending her husband’s closed trial in northwestern Shaanxi Province on Tuesday.

“I’m so sorry that I was unable to be there for you in person despite traveling more than 2,000 kilometers (1,240 miles) in the hope of seeing you with my own eyes,” Chen says in the video.

“But they have been holding me here on this highway for more than 10 hours now. I just heard from the lawyer that the trial is over already,” she says.

“But whatever the outcome, this has not been a fair trial. This trial wasn’t yours; instead it was the scene of their crime.”

Chang’s trial was in the Feng County local court where he faced “subversion of state power” charges.

Chen was also traveling with her son and mother. She had to stay overnight in her car.

Police reportedly used COVID restrictions as their excuse to not allow her into the county.

Chen later told the Chinese language edition of The Epoch Times that her husband was doing his job—what a lawyer is supposed to do—promoting rule of law and basic human rights.

“I don’t know what crime he has committed … The trial is unjust,” she said.

Her husband has also reportedly been tortured while in detention.

The trial reportedly lasted 90 minutes with sentencing to be announced at a later date.

Mr. Lin (alias), a supporter of lawyer Chang, also expressed his disbelief in the closed-door trial.

He said Feng County had been heavily policed since Monday evening with the authorities mobilizing state police from several provinces.

Supporters wanted to express their support for the lawyer’s wife and their son and mom.

“Chen must be under a lot of pressure. We just want to meet her and offer her some comfort,” he said, but the regime would not allow it.

Lin said what occurred to Chen is typical of the regime which regarded the people as enemies.

“They can take our physical bodies, but they can’t move our determination to resist injustice,” Lin added.

Several embassies, including those of the U.K. and Germany, also voiced concern over what occurred on Tuesday.

#ChangWeiping, arrested in 2020 after raising issues of torture and #humanrights in China (including his own mistreatment) is today scheduled for trial behind closed doors. The UK calls for the release of all those currently detained for promoting fundamental rights and freedoms. pic.twitter.com/NzdlNhNd8i

In early December of 2019, a group of Chinese rights lawyers such as Chang, Xu Zhiyong, and Ding Jiaxi, met in Xiamen, Fujian Province, to exchange thoughts and ideas to promote civil society.

Later that month Chinese authorities took action against the participants.

More than 20 citizens and lawyers of the private gathering were disappeared, summoned, or detained. Several were detained on the charge of “inciting subversion of state power” or “picking quarrels and provoking trouble.”

Both Xu and Ding had closed-door trials at the Linshu County Court on June 22 and June 24, respectively with sentencing said to be announced at a later date.

The lawyers for Chang, Xu, and Ding were asked prior to the trials to sign a “confidentiality agreement” to prohibit them from disclosing information about their trials.

Zhao Fenghua and Hong Ning contributed to this report.